It has taken me much longer than I expected, but I finally have the time to write down my thoughts on the first (and sometimes second) episodes for the remaining eight anime that premiered last week. At last, it’s time to close out this introduction to the Spring 2016 anime season and begin work on a more manageable list of shows to stay current with. Below are the last few shows to make or miss the cut and a couple that I am still undecided on. 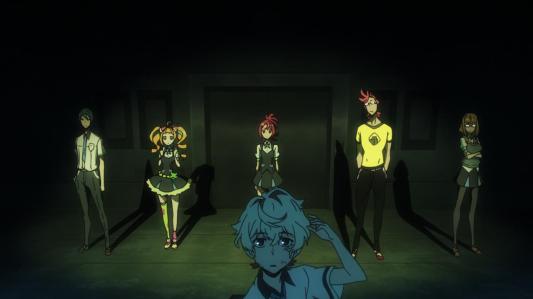 Kiznaiver is an easy choice for me given the vibrant and eccentric personality of its primary cast. I’ve enjoyed stories like these where a band of misfits is formed for some arbitrary reason and they get to know each other, work together, and accomplish whatever asinine goals depend on them and only them. With Kiznaiver, the characters are all very extreme and romanticized stereotypes that are masking deeper issues, and I’m interested in seeing these characters change and grow as the series progresses. And, in the meanwhile, it’ll be fun to see these conflicting and opposing personalities work together. In fact, it reminds me of a sillier, more comical (and thus, more enjoyable) version of Kokoro Connect. The decision to keep this is further supported by the aesthetics of the series, especially with the vivid colors and enthusiastic animation. If there is a disappointing with this, it’s that I can’t speak too highly of the setting, which doesn’t seem to have the same care and development as the characters or the story, but perhaps that will change once more is revealed. Nonetheless, Kiznaiver really impressed me with its first (and second) episodes, and it will be one to follow closely this season.

The more I watch of anime in general, the more I realize that I truly appreciate simple and relaxing slice-of-life shows. Flying Witch is exactly that, a very pleasant and tranquil slice-of-life/comedy about a young witch adjusting to a new life in a new location. The setting of Flying Witch strongly reinforces the intended atmosphere and theme, given that Makoto moves from metropolis Yokohoma, near Tokyo, to rural Aomori in northern Honshu. There doesn’t seem to be much depth in the characters right now, though we’re getting to see how Makoto is different than her cousins, but it does seem the humor and story will focus on more than just the witch given the attention to Chinatsu and Nao in the first episode. The scenic landscapes and backgrounds are astounding and easily a personal favorite this season. The characters do seem rather plain, but the expressions and reactions are conveyed clearly and it fits with that simple, easy mood. Overall, Flying Witch seems to fill that void of an easygoing, peaceful, and amusing slice-of-life anime this season, and I’ll be eagerly awaiting this satisfying anime each week this spring.

Hai-Furi follows in the wake behind other popular moe-military combinations – “moelitary” or some other awful portmanteau – but seems to be lagging behind in some of the areas that made those other franchises successful. Girls und Panzer and Kantai Collection both saw success with cute, moe anime girls in dangerous military situations for a number of reasons. For me, it was the whole absurdity of the situation, the personalities of the characters, and the humor present in the series. High School Fleet really only has… well, none of those things. The situation seems fairly commonplace in this setting, the characters are very flat, tame, and not necessarily creative, and the humor was drowned out by the melodrama of their teacher trying to kill them for whatever reason. However, the first episode did capture my interest, and I am somewhat invested to see where this goes. I think another episode should be enough to decide whether I want to keep this or not, so hopefully it goes in an exciting direction after what transpired in the first episode. 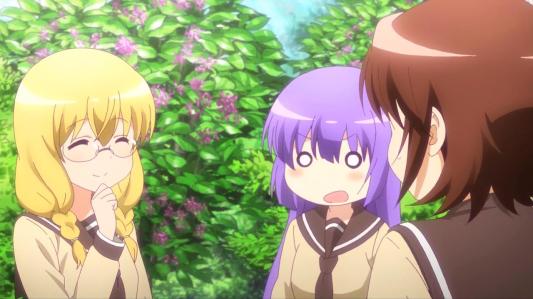 After one episode of Sansha Sanyou, I am faced with both positives and negatives. The good news for Sansha Sanyou is that the characters are cute, the animation is flashy, and the scenario seems decent for a comedy. The bad news for Sansha Sanyou is that I never really enjoyed any of the jokes or humor in the first episode and am wondering if this is worth keeping with so many other comedies this spring. I feel another episode is necessary before deciding whether to drop this or not given that 4-koma style comedies are often hit-or-miss depending on the content of the episode and often, the introductory episodes where everything is established is the worst in terms of content for comedy. Given that observation, plus the fact that all the positives are long-term qualities, I think I’ll need one more episode to see if it can prove itself to be funny or not. If not, I might consider keeping this around as an option to 4x this season.

Speaking about 4x-ing an anime, I will be 4x-ing Tanaka-kun (and that is essentially dropping an anime to me). The first episode of Tanaka-kun not only left me feeling listless (a joke probably used a thousand times by now, sorry that you have to put up with it more than once), but I don’t see it ever really improving given that the whole anime is about Tanaka-kun being bored and tired. I mean, the anime seems to be about one joke, and if I know the joke isn’t funny, why would I bother continuing with it? At least Tanaka-kun has a saving grace, which is that I find the female characters to be cute and amusing when they’re involved. Also, there are two girls with short, blue hair (but are so unpopular, they don’t seem to have names credited to them and only really appear in the OP and ED), so I think I’ll just skim through the episodes for just those two reasons. Yes, it is incredibly shallow, but I don’t really see any other value in keeping a series I don’t expect to enjoy otherwise.

Tonkatsu DJ Agetarou is another comedy that failed to produce any laughs or smiles and is one that I don’t see much change in the long-term. The anime does poke humor at the similarities between cooking tonkatsu and being a DJ, but… that seems to be it. The anime kinda boxes itself in with this title and this premise. Sure, it might go places with these themes, but it really failed to impress me with this first episode. I don’t mind the atypical or strange art style… in fact, it was because of the art style that I gave this first episode a try. However, it’s the content and comedy that ultimately flop with this anime. 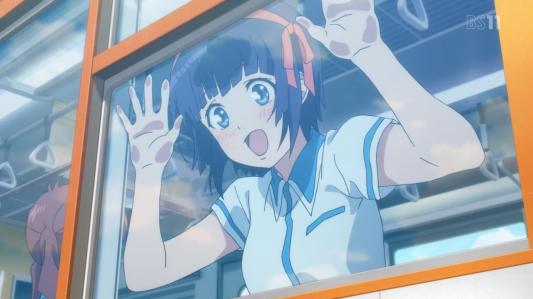 Had I only finished one episode, Kuromukuro would have placed in the “Undecided” category, but after two episodes, I feel as though Kuromukuro should be dropped… and, well, is being dropped. Kuromukuro certainly has a breathtaking amount of animation in the first episode, especially in the minor details like how the characters walked and moved. It certainly impressed me, especially with the variety of angles and with the mecha fight animation. Where Kuromukuro loses me is with its characters and the story. I felt disconnected from everyone and no amount of walking animation was going to make up for that. The characters felt more and more stiff and shallow as the episode went on, going from the main character (Yukina), to the UN director (Hiromi), to the scientists, and finally to the samurai dude (Ouma) who, unfortunately, is the secondary lead in this. The story didn’t do much to inspire confidence either, with these various alien mecha being the oni that Yukina’s father alluded to a decade prior. Yes, I realize the anime will be much, much more than what was shown in these introductory episodes given the extensive cast of characters, but I struggled through two episodes and know I can’t make it through twelve or whatever. And it’s a shame, because I really, really, really liked watching those characters walk around.

If I could ignore some of the faults and displeasures with this first episode, I’d be keeping Big Order. Fortunately, the uncomfortably heavy emphasis on the almost-but-not-quite incestuous relationship between the main character and his little sister and the tentacle bondage and moaning during the credits were enough of a warning to realize that this isn’t the anime for me. It’s a shame, really, since Big Order was decent all-around, given its scenario, its setting, the characters themselves, and their superpowers. In fact, if you just cut out the scenes with the sister and the very ending, I’d strongly consider keeping it… but given that these are two elements that are likely to last throughout the series, I can’t really see myself putting up with an anime knowing that I’ll irritated or annoyed with a scene or two every episode. So, with that, it’s probably best to drop it now rather than try to balance enjoying the elements I enjoy with the bits and pieces I don’t.

This entry was posted on April 20, 2016, 6:05 AM and is filed under 2016 Spring, Anime, First Impressions. You can follow any responses to this entry through RSS 2.0. You can leave a response, or trackback from your own site.