Posted by avvesione in Anime, Jormungand on June 29, 2012 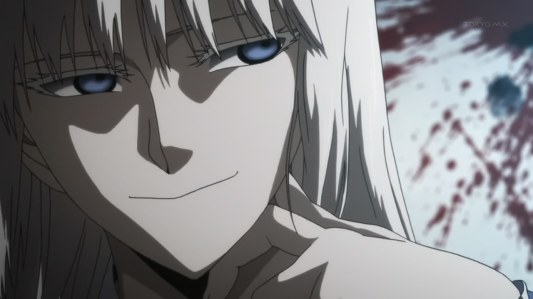 While the story of Jormugnand documents the adventures of Koko and her select crew of proficient bodyguards, there are considerable flaws in the storytelling that otherwise inhibit the anime from thriving and fulfilling its vast potential.  Though the characters and content have been stimulating and effective thus far, considerable faults exist in how these affairs progress and ultimately how the characters react and change under these intense conditions.  Though there have been challenges and obstacles for the characters to overcome in these various events, there are hardly any challenges or obstacles in their stories.  That is, there are virtually no complications or resistance in Jormungand in regards to how the stories unfold and resolve themselves.

END_OF_DOCUMENT_TOKEN_TO_BE_REPLACED

Posted by avvesione in Anime, Jormungand on June 20, 2012

Within Koko’s team of bodyguards, interpersonal communication is a rarity.  Often minimal and infrequent or limited to the mission at hand, we hardly ever see the bodyguards converse with each other even during their times of peace and relaxation.  Rather, they fragment themselves to be alone or thereabouts and remain that way until they’re required to assimilate again for their next objective.  But when Koko is communicating with any of her bodyguards, they stand attentive and respond diligently.  The use of communication in Jormungand certainly reveals an interesting dynamic given the structure of Koko’s team and how they associate with each other.

END_OF_DOCUMENT_TOKEN_TO_BE_REPLACED

Posted by avvesione in Anime, Jormungand on June 15, 2012 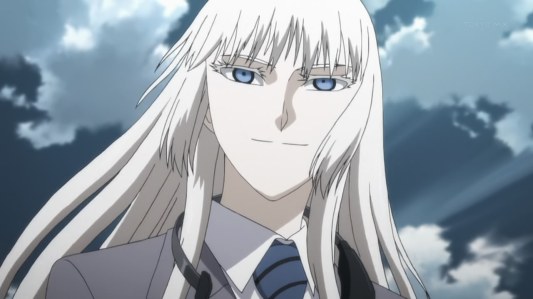 Despite the constant presence of humor throughout the series, Jormungand is an anime founded in a serious nature.  Without this essential backbone providing structure to the entire series, the whole setting about an arms dealer and her band of bodyguards would feasibly collapse.  And due to this relationship linking the setting, story, and characters together, the main cast can partake in only limited amounts of comedy before it starts to undermine what the anime originally stands for.  But Scarecrow and Schokolade are immune from this restriction and are able to flourish where others cannot.  What is it about this duo that allows them to contrast with the rest of the characters in Jormungand so greatly?

END_OF_DOCUMENT_TOKEN_TO_BE_REPLACED

Posted by avvesione in Anime, Jormungand on June 8, 2012

What is it about the action in Jormungand that causes it to be tedious and unsatisfying?

END_OF_DOCUMENT_TOKEN_TO_BE_REPLACED

Posted by avvesione in Anime, Jormungand on June 1, 2012

The diversity of settings, both physical and societal, has had a profound effect on Jormungand.  Not only has the constant variation in setting provided dissimilar locations in which to stage the world and enhance our understanding of how weapons dealing affects these regions but these different backdrops all have special needs from weapons dealers and have presented Koko and her enterprise with unique challenges and obstacles for her to address or overcome.  As each episode has taken us to a distinct area of the globe, every setting has allowed Jormungand to explore and expose various topics, ideas, and trials that would otherwise be unmanageable with only a single, defined location for which to base the anime off of.

END_OF_DOCUMENT_TOKEN_TO_BE_REPLACED

Though the frequent skirmishes, provocative action sequences, and persistent use of modern weaponry are the principal attractions of Jormungand, it is actually the business of selling weapons that drives this anime.  And though there is this constant reminder of how the effects and influence of guns are what shape the world, there’s that required step of currency prior to weapons that permits that philosophy to be true.  Yes, while often indirect or merely overlooked, Jormungand boasts a surprisingly robust industrial and fiscal side that suggest that this is quite the economic anime among its numerous other strengths.  The commercial side to Jormungand is an essential characteristic to the series; it is used to explain how and why Koko encounters and connects to everyone and everything.  Just as it is the guns that influence the world in Jormungand, it is the trade of weapons that controls the story of Jormungand.

END_OF_DOCUMENT_TOKEN_TO_BE_REPLACED

Through six episodes now, the content of Jormungand has essentially been episodic with barely a handful of hints indicating a central or overarching plot.  Everything thus far has either been disconnected stories or timely flashbacks presented to us in a seemingly linear timeline.  While acceptable in genres where stories are secondary to other elements, such as comedy and slice-of-life, this approach to storytelling is ineffective or unfavorable for what Jormungand desires itself to be.  With no focus or substantial development on the main plot thus far, a discernible weakness in Jormungand has begun to emerge.