Today, December 20th, marks the 1 year anniversary of my anime blog.  And since it’s in the middle of the 12 Days of Anime, let’s double up this anniversary with an appropriately themed 12 Days post.  The topic for today is about something central to the beginning of my anime blog and something I learned over the course of this year.  My whole system of classifying anime through the tags of Brain On/Brain Off never really made sense, caught on, or was used by others.  You could even say: it was never a good idea.

END_OF_DOCUMENT_TOKEN_TO_BE_REPLACED

Posted by avvesione in Manga, Needless on November 21, 2011

Ah, Chapter 96.  It’s another chapter which means a bunch of new developments and the return of a few old faces.  This time, it’s the reappearance of probably my two favorite characters in the series, so I’m beyond thrilled.  And regarding the story, another character is revealed to be marked with a Stigmata.  But with what we’ve learned in this arc about cloning and Eden’s Seeds, could this a true Stigmata or another fake? **Warning: spoilers below**

END_OF_DOCUMENT_TOKEN_TO_BE_REPLACED

This week: a surprisingly emotional iDOLM@STER episode, the lone person who cares about the truth in UN-Go, and a spotlight on Taichi in Chihayafuru.  Oh, and the order of anime in this post has flipped, so now it’s reverse. Yippee!!

END_OF_DOCUMENT_TOKEN_TO_BE_REPLACED

Posted by avvesione in Anime, Shinryaku! Ika Musume on November 18, 2011 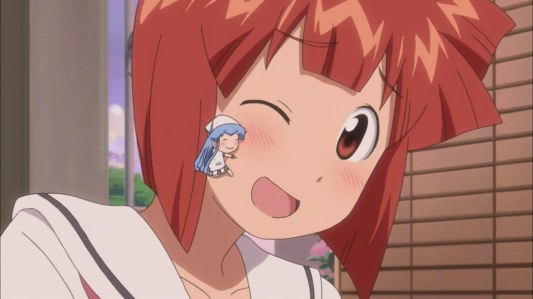 I love those Mini Ika Musume skits.  No, it’s not just because they’re always so freaking adorable that I feel all warm and cozy inside each time.  That certainly helps but it is not the main reason why I get excited every time our tiny heroine gets caught up in a new adventure.  What I like most about the Mini Ika Musume skits are the entirely different feel it has from the rest of series while still being effective in its laughs and appeal.

END_OF_DOCUMENT_TOKEN_TO_BE_REPLACED

Posted by avvesione in Anime, Shinryaku! Ika Musume on November 2, 2011

Our zany and simple-minded squid invader certainly enjoys the company of humans and our lifestyles and activities above the surface.  And she hasn’t receded her ambitions of conquering mankind either, still actively pursuing her goal in every episode.  But she never has any feelings of internal conflict or ambivalence over her simultaneous and contradictory opinions toward these subjects.  She can’t be friends with humans if she also wants to invade mankind.  So if Ika Musume had to choose between one or the other, which would she select?

END_OF_DOCUMENT_TOKEN_TO_BE_REPLACED

This week: The mystery of Inga from UN-Go, worries in Chihayafuru, and Tamayura not really being a photography anime.

END_OF_DOCUMENT_TOKEN_TO_BE_REPLACED

Posted by avvesione in Anime, Shinryaku! Ika Musume on October 23, 2011 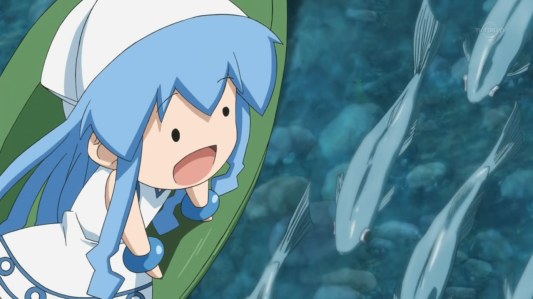 What helps keep the comedy fresh and entertaining each week are a multitude of factors, including the story, script, characters, and blah blah blah you already know that.  But Ika Musume frequently does something that many comedy anime fail to even try to do and that’s play around with role reversal.  The versatility in the cast of Ika Musume allow the show to switch up characters to create new dynamics for provide different approaches to its comedy.