Posted by avvesione in Anime, Nisemonogatari on March 30, 2012

When an anime does not meet expectations, it is frequently portrayed as a negative on the series rather than on the individual’s expectations.  Regardless of how unrealistic or grandiose the initial expectations are, the unfortunate outcome usually places the blame on the anime, often times summarized as, “it wasn’t as good as I expected.”  While that method is certainly fair and appropriate for some anime, it isn’t for others or anime in general.  Evaluating Nisemonogatari based off my expectations alone, which is what I did after watching this finale, is a misstep I took in properly judging this anime.

END_OF_DOCUMENT_TOKEN_TO_BE_REPLACED

Posted by avvesione in Anime, Nisemonogatari on March 10, 2012 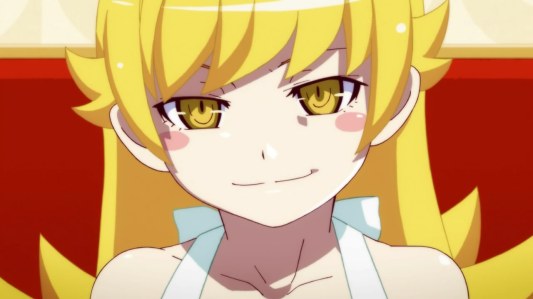 Everything in Nisemonogatari is serious business.

…but only if you’re Araragi Koyomi.  For everyone else, life in Nisemonogatari is somewhere between light-hearted and meaningless, a string of sunny days in which to simply enjoy life and nothing more.  Though there are days that contrast this norm, they only appear as a singularity in these characters’ lives and the rest is spent in merriment and amusement.  With lives like these, you have to wonder if it’s really the girls who are cursed and vexed or if it’s just Araragi.

END_OF_DOCUMENT_TOKEN_TO_BE_REPLACED

Posted by avvesione in Anime, Nisemonogatari on March 5, 2012

Bakemonogatari and Nisemonogatari are extremely analogous in many respects, beginning with the obvious such as the recurring characters and static themes in each arc to the minor details like the specific visual styles employed during gags and how characters appear in certain defining shots.  As the sequel, Nisemonogatari borrows heavily from the original series but there are enough subtle differences between the two to distinguish it as a separate series rather than just a simple continuation of the first.  Among these modifications is one I’ve grown particularly fond of which reiterated itself this episode with the introduction of the mature and uncomforting beauty, Kagenui Yozuru, and the slightly obstinate and slightly tranquil child, Ononoki Yotsugi. Whereas Bakemonogatari dealt with conflicts derived from phantasm and strange phenomena, Nisemonogatari stems its plots around intelligent beings who can create a more dynamic and engaging story beyond the capabilities of curses and other setbacks.

END_OF_DOCUMENT_TOKEN_TO_BE_REPLACED

Posted by avvesione in Anime, Nisemonogatari on February 26, 2012

Interpersonal relationships not including Koyomi are routinely concealed or distorted to the point where it seems like the entire universe revolves around our perverted protagonist.  But this episode revealed another connection outside our hero with Karen being a longtime admirer of the talented and expert martial artist and friend to Araragi, Kanbaru.  The way Nisemonogatari is constructed prevents us from seeing the other characters really interact with each other and show they live lives outside of Araragi.  It’s up to subtle hints like these to show us that these characters do interact with each other and have other friendships besides the one they have with Araragi.

END_OF_DOCUMENT_TOKEN_TO_BE_REPLACED

Posted by avvesione in Anime, Nisemonogatari on February 21, 2012 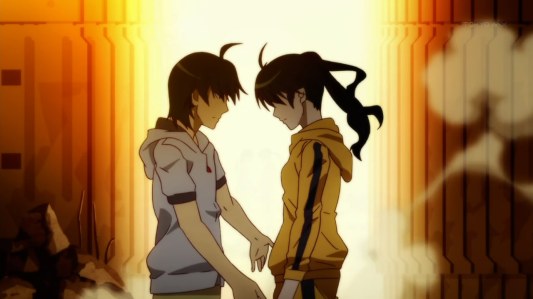 What is justice?  During the seventh episode of Nisemonogatari, Karen and Koyomi both explained their ideals of justice and what it meant to the situation at hand.  The way the story progressed, though, Koyomi’s version of justice disproved Karen’s more simplistic and romantic view of justice and the two came to understand each other in a wonderful scene of forgiveness and familial love.  But is Koyomi’s definition of justice really acceptable or was his definition only suitable for the present story?

END_OF_DOCUMENT_TOKEN_TO_BE_REPLACED

Posted by avvesione in Anime, Nisemonogatari on February 12, 2012

Despite Nisemonogatari narrating the stories of Karen and Tsukihi Araragi, the presence of these characters, to date, has been woefully underwhelming.  Although the current story concerns Karen’s unfortunate curse, her participation and involvement has been an absolute minimum and been reduced to a sideshow compared to the main event of the Araragi circus, the parade of girls from the former series.  The majority of this episode continues this theme by examined Senjougahara’s revenge on Kaiki rather than Karen and her predicament.  I wouldn’t be surprised to learn, if true, that Nisemonogatari has spent more time on Senjougahara’s fascination with Kaiki rather than all the combined time Karen and Tsukihi have been allotted.  That’s the true travesty here.

END_OF_DOCUMENT_TOKEN_TO_BE_REPLACED

Posted by avvesione in Anime, Nisemonogatari on February 5, 2012 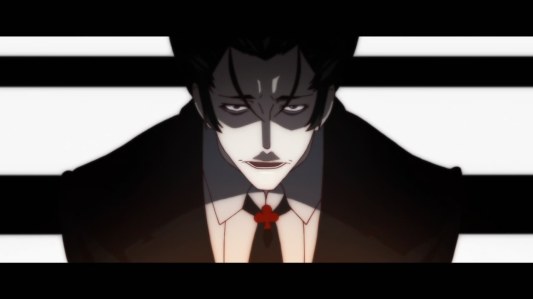 Although it depends on each specific character and varies on a case-by-case basis, I tend to like antagonists in anime.  Generally speaking, what fascinates me about villains or adversaries are not that they’re commonly portrayed as wicked, evil, or used in a negative manner but rather for the rationale for why they are a villain or adversary.  The ones with logical and coherent backgrounds not only make the best antagonists but they do double duty and reinforce the story by providing a satisfying obstacle for the protagonist to overcome and help inhibit the development or expansion of plot holes or shoddy storytelling.  They really are one of the most crucial characters to any anime they’re in.  And Kaiki is no exception.