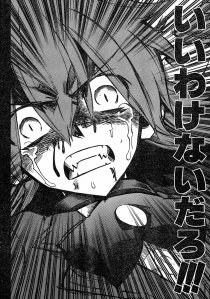 Let’s talk about Cruz for a bit, shall we?  After all, he deserves it. **Warning: spoilers below**

Needless has just completed one hundred chapters, a magnificent adventure that began back in 2003 with the helpless and defenseless Cruz witnessing the death of his sister, Aruka, and eventually being rescued by his savior and hero, Adam Blade.  As the manga progressed over nearly a decade, numerous elements of the series have evolved, ranging from character personalities, art style, variety and delivery of humor and countless other aspects.  Other elements, however, remain unchanged.  Much like in Chapter 1 of Needless, Chapter 100 depicts the events of Aruka’s death followed again by Blade entering from above to rescue Cruz from almost certain death.  But unlike the first chapter of Needless, Cruz needed not the help of Blade because he had already saved himself from annihilation.  After sincerely wishing for a Fragment for the past hundred chapters, it seems Cruz will realize his wish, his impossible dream.  Yes, it’s an incredible miracle; it appears that Cruz has a Fragment of his own.

Just what his Fragment is, however, has yet to be determined.  The structure of Chapter 100 mirrored closely to some of the events of Chapter 1 though specific roles were switched and the situation almost entirely different.  Although it was unknown at the time, the first chapter revolved around the consequences of Simeon searching for an invaluable data chip the Resistance had hidden on Cruz.  In this chapter, Simeon is again seeking for a similar data chip only to retrieve it again from Cruz, this time from within his extraordinary brain.  As mentioned before, the two chapters showed the death of Aruka at the hands of Simeon, a detail of significant importance not only for the manga but for Cruz himself and his development.  And of course, both chapters show Blade’s grand entrance in time to save Cruz though this time he was accompanied by the lovely Eve.  But for all the similarities, there are some important differences, specifically with Cruz himself.

Perhaps the most noteworthy or momentous difference between the two chapters are Cruz moments before his destruction.  Facing certain death in the sewers of Blackspot, Cruz desperately wished he possessed a Fragment before collapsing to his knees and crying plentifully.  Like the first chapter, Chapter 100 showed a visually disturbed Cruz crying over his sister’s death and then proceeding to be fried by her overwhelming fire Fragment, Agnishwattas.  At first, Cruz was prepared to accept his death, determining it to be fine to be reunited with his sister in the afterlife but that was not to be.  After one hundred chapters of growth, friendship, adventure, education, tragedy, humor, and sexiness, Cruz refused to give up.  He refused to accept this horrific fate.  Death is not an option.  Not now, not ever.

And with that came the first visual manifestation of his powers, breaking free of the chains that restrained him to the examination table and knocking back the most powerful Needless in the world, Adam Arclight.  Not only that but the aura surrounding Cruz persisted up until the arrival of Blade and Eve, showing that the power was not momentary.  And despite all this, Cruz was unaware of what he did and why he was able to survive Arclight’s relentless onslaught.  But not before the chapter ends does Blade tell Cruz that it was he who saved himself from Arclight and it was because of his Fragment.  It’s then when Cruz realizes he has a Fragment of his own.  And that, my friends, is where Chapter 100 concludes.

For Cruz, Needless began as a nightmare.  Not only were all his comrades brutally murdered by Simeon, but he had lost his sister right before his eyes and lacked the confidence or ability save himself from certain death.  Then, he was needless.  After being rescued by and spending time with Blade, Cruz slowly began to realize his worth.  Eve was the one who taught him to find his place on the battlefield and, with his superior intellect, he was able to assist his friends in their fights by exploding weaknesses, providing tactical advice, identifying fragments, and providing support whenever possible. As his adventure progressed and his friendships increased, his confidence blossomed and Cruz became more active not only with his intelligence but by involving himself in battle, often time to save the friends he loves.  He became physically involved in battle, twice being the last defense to protect Blade from Setsuna in the Third Shelter, when deceiving the clone army and facing Hatfield on his own in order to save the Black Market, and doing everything within his powers to save Blade and Eve during the Eve’s Story arc.  We’ve watched Cruz slowly develop from a vulnerable and timid boy into a brave and compassionate hero and the manifestation of his Fragment is the culmination of his diligence, industriousness, and the desire to help those around him.

Cruz deserves this.  Not just because he needed a Fragment to survive or because he wanted a Fragment for his entire life.  No, the reason Cruz deserves to be rewarded now is because of everything he went through over the course of this manga, over these past one hundred chapters.  Everything he’s had to do and everything he’s done are reason enough for him to deserve this Fragment, whatever it might be.  Congratulations Cruz, you earned it.

Being Chapter 100, we all figured there would be important revelations and events of unknown magnitude that could drastically change the series and shift it on a completely unexpected and incredible path.  With the removal of the second data chip from Cruz’s brain, Aruka’s death, the manifestation of Cruz’s fragment, and the return of Blade and Eve, it certainly seems that the chapter did all that and possibly more.  What happens next will likely be the conclusion of the two concurrent battles and finally a progression toward what will likely be the final arc of the manga.  The end is approaching but it is still a ways away.

One curiosity I have now is what Cruz’s role will become now that he appears to have a Fragment.  Playing the role of sacrifice and seems like an applicable role for Cruz, especially given the Judeo-Christian symbolism prevalent throughout the manga, and I wouldn’t be surprised to see Cruz do something noble to save those around him.  But if that were to happen, I’d be disappointed.  After everything Cruz has gone through, seeing him being attacked, bullied, and intimidated by others, I hope he is able to have a happy life following the events of this story.  To me, Mio seems like Cruz’s best friend since she always seems to listen to Cruz and compliment him for what he does, even going out of her way to rescue him following Arclight’s Eden Seed release in Chapter 50.  At most, the worst she’s done is prolonging Cruz’s crossdressing but that could be explained by how she likes having another Shoujo Butai (Girl Squad) member with her.  And as the manga has progressed, all of Cruz’s friends have begun to treat him better (it’s the uniform, isn’t it?) and he’s responded positively as a result.  With that being said, seeing Cruz lose his life at the end of Needless would be incredibly saddening because Cruz deserves something better.  I’m sure at this point everyone roots for Cruz to succeed and hopefully, that is what happens to our protagonist.

Also, one other note is that there was a special 4-koma included following the conclusion of Chapter 100, Needless Gaiden St. Rose School, showing 13 pages of wonderful comedy featuring Cruz, Setsuna, Kuchinashi, and Mio at, where else, St. Rose!  With all the serious events going on in the manga recently, this addition may seem to be a little strange because its focus is completely different but it really helps clear the palate after a number of heavy chapters.  I’ve always been a huge fan of the comedy in Needless (perhaps my favorite part) and I thoroughly enjoyed this addition, especially seeing the characters come together for simple fun and humorous gags.  Although I don’t expect another one of these to be released anytime soon, I’d love to get another 4-koma addition like this because it is really enjoyable as a fan of comedy and a fan of Needless.  I do hope the comedy returns to the serialized manga again soon, too, but that may or may not be possible given the substantial material in current chapters.  And even if the comedy does return in full-force, I’d still like to see more 4-koma of Needless since this bonus was so enjoyable.

This entry was posted on March 29, 2012, 3:11 AM and is filed under Manga, Needless. You can follow any responses to this entry through RSS 2.0. You can leave a response, or trackback from your own site.