Assuming the primary cast of Sakamichi no Apollon is limited to Kaoru, Sentarou, Ritsuko, Yurika, and Jun, then presently, each lead character is confronting their own personal challenges.  The sixth episode reiterated, magnified, or illuminated all the problems that each character is currently facing.  It has been staged in a way so that these issues have now become the forefront of the anime, surpassing previous themes and other storylines.  The effect has been the reshaping of how Sakamichi no Apollon presents and narrates its story and represents its characters.  But no single problem has been responsible for this drastic and fundamental change.  Every character and their distinctive challenges have been integral in this restructuring of Sakamichi no Apollon.

First up is Kaoru whose chronic social anxiety have begun to resurface after being subdued by befriending Sentarou and Ritsuko.  Though still clearly friends, Kaoru has begun to panic at the prospect of losing Sentarou, a process that began when he discovered they would be in separate classes as second-years and accelerated by the flamboyant and moe Matsuoka Seiji.  With this nervousness beginning to dictate Kaoru again, his character has regressed and he is beginning to behave in ways that are uncomfortable to for him which has begun to affect the others around him.  Unable to cope with these delusions and stresses, he’s starting to exert pressures on the other characters now and put them outside their happy zones and are beginning to act differently, too.  Beyond affecting the characters, it has also deemphasized the romantic elements of the series, too, with Kaoru now worrying more about losing Sentarou (and not breaking his heart) than winning Ritsuko.  Essentially, Kaoru’s problem is affecting himself and others in a negative way and has redirected his focus toward an existing friendship than a fleeting romance.

Rather than perceiving himself to be lonely like Kaoru believes, Sentarou is facing the issue of actually being alone.  Isolated in a new class without the two students who understand him, Sentarou is a stranger in a strange land.  However, unlike most of the other characters in Apollon, Sentarou has begun to act on his problem and has begun to reach out to people strengthen his relationships or establish new ones.  By asking out Yurika, though at the disapproval of Kaoru, Sentarou took a positive step in the relationship he wants to pursue, though he seemed to regret his awkwardness and is unable to read Yurika’s feelings.  Similarly, Kaoru has quickly developed a friendship with Seiji who seems to be using Sentarou solely for finalizing his band and working towards whatever stardom was in Japan in the 60s.  These activities have had an indirect impact on the story.  Rather than affecting his character exclusively, chiefly because he’s worked at solving it, his problem is how it affects the others around him, especially Kaoru.  You can think of this problem as a catalyst and an explanation to Kaoru’s current problems. 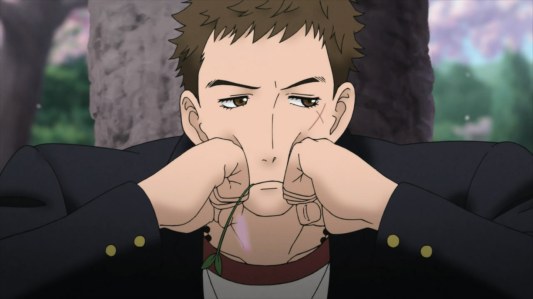 Ritsuko’s problem has remained virtually unchanged for the past few episodes and still circles the issue of her being in love with Sentarou and wanting to retain or strengthen her friendship with Kaoru.  Unlike the previous two characters who problems were either reestablished or innovated, Ritsuko’s has lingered for a number of episodes now.  However, the importance from this episode is not that the problem exists and is altering herself and others but that the problem has been reduced in terms of importance and been removed from the spotlight.  That’s the significance of Ritsuko’s problem; it has taken a step back to focus on the current issues.  And the way it’s been diminished has been notable, too, since there has been little progress toward solving it.  No, it’s just simply faded with Kaoru taking up interest in preserving his friendship with Sentarou and Ritsuko playing a lesser role in this episode.  What it’s done for the story is that it has allowed for the other problems to manifest and give them proper time to create a foothold in the story.  It’s unlike the previous two but it still has played an essential role in redirecting the story by slowing down the previous plotlines and allowed these new ones to accelerate.

Before this episode, Yurika’s problem was completely unknown to her and somewhat oblivious to the audience.  After learning that Jun had abandoned his dorm in the Tokyo metropolis and never received her letter, she realized her feelings for Jun would go unanswered.  What this does is take Yurika a step back in her relationship, thus putting the pressure on her to find Jun and receive an answer about her romantic interest in him and see if he can return it.  Rather than continuing on with a simple student life, Yurika will now put more time and energy into Jun.  Probably much more time and concentration than she put into writing that letter (which unfortunately happened off-screen).  How this issue will affect the story is that Yurika’s role strengthens in the anime.  She’s now going to pursue Jun much harder now which will have a negative trickle-down effect on the three previous characters.  Her emotions, too, are less cheerful and heartfelt, something that can help clarify the magnitude of her growing problem.  It also carries with it more potential than all the others since it can go in more paths and lead to more outcomes than any other.  Though not the chief problem or main storyline of the series, this seems to hold the most energy in terms of changing the story, as well as the most potential for destruction, too. 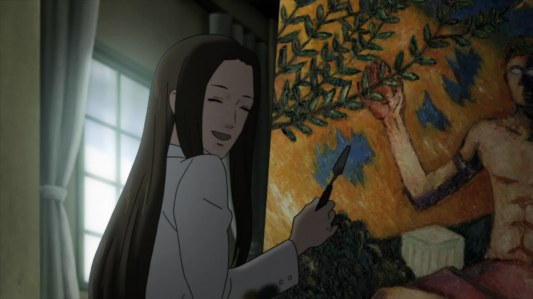 Last is Jun, the lad who fled his university life in Tokyo and is shown to be a drunken wreck, face buried in his arms in the corner of a shady dive in Kyushu.  While the origin and extent of his problems are unknown, we can see the effects of his problem are the most detrimental than any other in the series.  Either due to financial debt, a run-in with a gang or the mafia, being targeted by student activites, or simply due to heartbreak, Jun is attempting to distance himself from his problem as best he can, both in terms of physical location and mental status.  Those, however, will not be enough and we’ll see just exactly what he’s gotten himself into.  Like Yurika’s, his problem will affect the entire cast in a number of outcomes, though have the strongest influence on Yurika and Sentarou.  We can already tell it will have a negative impact on the series and all the characters but it will be interesting to see how it affects everyone and how everyone responds.  I’d be interested to see something along the lines of Jun even dying due to  the mob or something but I believe we’d get more out of the remaining cast if he were alive and proven to be deceitful or something instead.  Either way, his problem was just shown but it will have a significant influence on the story when its time comes. 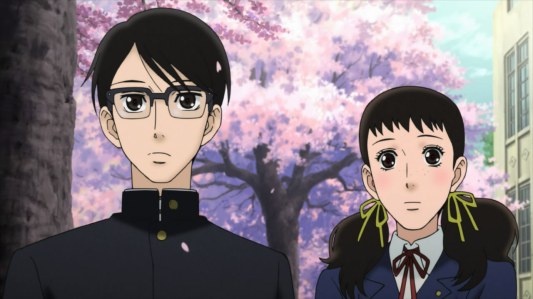 Essentially, these specific character challenges have become the primary storylines in Sakamichi no Apollon.  Each is playing a different role in how the story is changing and holds the power to move the story in whatever direction it wants.  Similarly, the older storylines and themes from the past episodes have weakened, leaving the whole jazz, Christian, and Kaoru’s family themes being moved from the spotlight.  And now that the issue has been brought to light, the question becomes is this positive for the series.  In a sense, no, it actually isn’t, but that’s just one of the ways I interpret these changes.

I would have rather seen the older issues be somewhat solved or expanded than being ignored like what this episode did.  The whole jazz theme in the series seems severely underused or underappreciated given how it is one of the fortes and most distinctive aspects of this series.  Perhaps the conflict it will have with Seiji’s rock band will revitalize that aspect of the series but it just has always seemed like a footnote rather than theme in this anime.  And unless the Christianity in Apollon is meant for developing Sentarou’s character, then it too suffers the same fate as the jazz.  And for the importance Kaoru put on his father as a comforting and supportive figure, his appearance was beyond underwhelming.  I’d like to see more out of Kaoru’s new family, too, especially Mariko who matches well with the ages of the main cast.  But whatever happens is what happens and this change in the series may turn out to be better than I imagine and satisfy me beyond what the previous storylines could do.  Still, it hasn’t been my favorite and I should really see how these problems play out before judging, but this new direction is not what I prefer to see in Sakamichi no Apollon.

With the introduction of Seiji, I can’t help but pretend his character symbolizes everything about current moe anime.  His character sticks out so much in Apollon that you can’t help but notice him and think about what he could represent.  And the way he does it, through acting flamboyant, cutesy, energetic, and generally genki, I fail to see him any other way.  His appearance, complete with fang, are strong hints toward this, too.  Hell, we even got a shot of pantsu, what could be more moe then that?  If it is this deliberate, I can’t help but wonder if Apollon is trying to make a statement about modern anime by showing it being defeated by Kaoru and Sentarou in jazz.  Well, something will happen to Seiji and it will be fun to see how this translates to anything given what his character is. 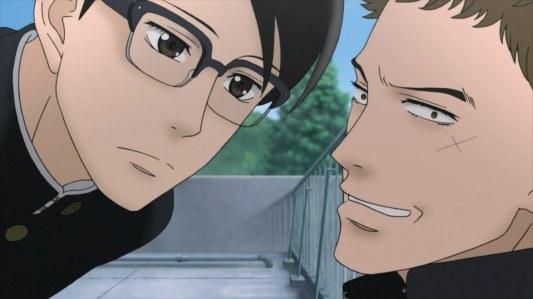 This entry was posted on May 20, 2012, 12:37 AM and is filed under Anime, Sakamichi no Apollon. You can follow any responses to this entry through RSS 2.0. You can leave a response, or trackback from your own site.