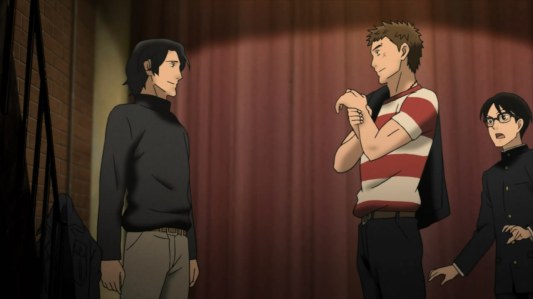 With one relationship virtually resolved at this point, what remains are three potential lovers vying for the final romance in Sakamichi no Apollon.  Conventional wisdom and basic arithmetic would immediately suggest that one heartfelt Romeo will be left without his Juliet and be thrust into demoralizing loneliness and the remnants of his fragmented dreams.  But is such a tragic fate already the decisive outcome for this unfortunate trio?  It all depends on how the final scenes and dramas in Apollon play out and even then, depending on your interpretation, there may or may not be a luckless loser when the final curtains close.

Given the heartwarming and endearing escape from Kyushu by Jun and Yurika at the end of the ninth episode, the collective eyes of the audience turn to the three remaining main characters of Apollon in Kaoru, Sentarou, and Ritsuko.  Based on the heterosexual nature of the class and the culture they reside in, the two obvious outcomes of this situation are to pair Kaoru with Ritsuko or for Sentarou and Ritsuko to be together.  Either of these options will leave a male member out of a relationship and destined to be solo at the end of this anime.  Here, it seems obvious that one individual will be bestowed the title of Loveless Loser but that is not necessarily true given the current status of infatuation and crushes.

The first possible way to avoid a character being a loser is if, and only if, Kaoru’s feelings for Ritsuko have truly moved on.  Judging from his actions, thought-process, and constant observation of all things Ritsuko, it appears he still harbors strong feelings for his former crush.  One might even say his motivations are even stronger romantically than before since he’s paying special attention to what he believes Ritsuko wants rather than fulfilling his selfish desires.  From this basic perspective, it’s quite clear that Kaoru is deeply concerned with Ritsuko but that doesn’t necessarily correlate that he still has feelings for her despite the knee-jerk assumption.  It is very possible that Kaoru no longer has feelings for Ritsuko and, should she confess her new feelings to him, he may pull the same response she gave him previously and not accept her feelings.  At this point, Ritsuko could turn back to Sentarou and satisfy his romantic feelings or the final romance could never form in a move certain to infuriate fans (but would make me jovial).  Given this final outcome, it’d be impossible to say there is anyone left out since the decisions were made to reject romance rather than force one of their friends to be the kid who loses in the first and only round of musical chairs. 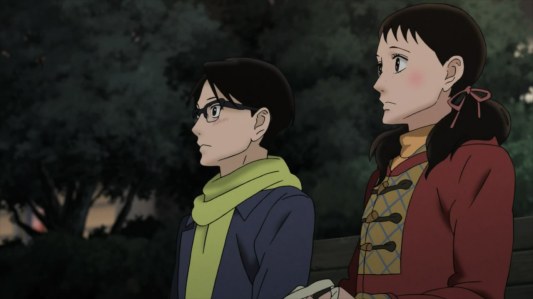 Now, should the anticipated outcome of another romance forming before the finale happen, then it would indicate that one character is left without a mate and thereby be labeled the unfortunate loser of Sakamichi no Apollon.  This is the most literal interpretation of the events seeing as there were five people to start, four of them have formed two pairs, and one is… yeah, I’m sure you get the picture… But a more thoughtful interpretation of this outcome can reveal the loner to not be such a negative designation.

For starters, should Kaoru and Ritsuko end up together, then it can be viewed as a positive for Sentarou in terms of the progress he’s made.  Before Kaoru’s arrival in Kyushu, Sentarou never interacted with anyone else his age besides Ritsuko and was trapped in an asocial state.  Moreover, he never developed feelings for Ritsuko until he realized Ritsuko was chasing him since their amiable childhood.  If he can arrive at the conclusion that these events have enriched and enhanced his life, then it would be improper to label him as a loser since it enabled him to live a better life and to actually experience romantic feelings.  Even with the outcome where he’s unsuccessful with both his crushes, he’s proven that he can love and will be able to find a mate whenever the opportunity comes.

Should the opposite happen and Sentarou pairs up with Ritsuko, then a different view on the matter is needed to show the positives of Kaoru’s outcome.  In order to disregard the label of ‘loser’ on Kaoru, one needs to remember that the original relationship was Ritsuko chasing after Sentarou with Sentarou now realizing his feelings for Ritsuko.  Furthermore, Kaoru has been rejected once already by Ritsuko and has been playing the role of Cupid in trying to set those two up for a relationship.  Even if his silly interventions don’t affect the relationship between Sentarou and Ritsuko at all, he is in some part responsible for this outcome.  By thinking and acting the way he currently does, that is promoting the romance between Sentarou and Ritsuko before his own, he’s accepted the fact that he is fine without a partner currently and that doesn’t really fit the title of Loveless Loser appropriately given his self-appointed role.  Furthermore, his character has progressed substantially in that he’s overcome his social anxiety, his panic attacks have lessened, and he’s become a semi-popular student with two fantastic friendships.  It just seems wrong to view Kaoru as a loser or loner at the end of Apollon should he be the one without a lover.

With Jun and Yurika off to Tokyo to begin a new life together and seemingly destined to never return to Kyushu, one begins to wonder if what we saw at the train station was the conclusion to their story.  Will the two lovers reappear before Sakamichi no Apollon concludes?  If not, and their story is already a part of the past, then I can say that I am satisfied with their romance, their relationship with others, and how they exited the series.  Anything more on these two, I feel, would be unnecessary but it wouldn’t be detrimental either, though it depends on what they do.  However, I prefer they leave it untouched and leave it up to us to decide what happens next and how their life unfolds as they head towards a fresh start and a new beginning.

This entry was posted on June 10, 2012, 12:14 AM and is filed under Anime, Sakamichi no Apollon. You can follow any responses to this entry through RSS 2.0. You can leave a response, or trackback from your own site.