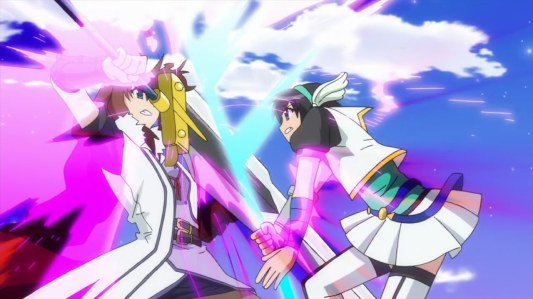 As with any fighting anime, clashes between the characters are the most fundamental and exhilarating aspect to watch.  Whether it’s a simple duel or a rousing team battle, a strategic melee or a super-powered, special attack shout-a-thon, witnessing these fights are what makes the anime sensational and satisfying.  Of course, to make the brawl more appealing and meaningful, the outcome cannot be predetermined nor the conflict be completely one-sided.  And given the lack of a power ranking system, fighter taxonomies, and the presence of a multitude of fighting styles and unique abilities, Dog Days’ has an ideal structure in place to make every battle as captivating, invigorating, and gratifying as possible. 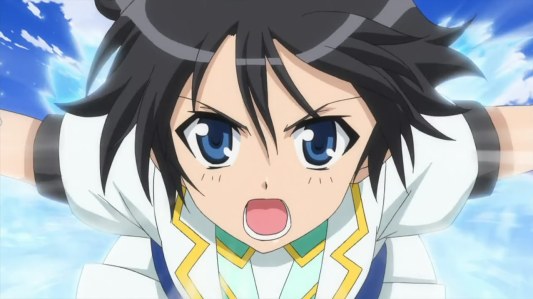 Now that isn’t to say there is no method of determining who is stronger or who should win before every encounter, just that there is no system of discrete levels or numbers in place and the current process is rather vague or unclear.  With Dog Days’, titles, classes, and acknowledged histories exist for the characters, often spoken by the characters themselves before battle as a means to hype each side before the conflict initiates.  One can always use the results of previous fights, too, perhaps a more reliable and practical system, though the circumstances of each fight vary and it’s hard to apply those exact specifics to every fight.  And, like with any fighting anime, we can tell who are the goodies and the baddies and who the main characters are, so that always plays some minor role in influencing the fight though that itself can be manipulated to make a loss more significant and unforeseen.  Regardless of the amount of details or methods in place, the structure of strength and ability in Dog Days’ is left ambiguous and unresolved, thus leaving the fights as unpredictable and entertaining as possible. 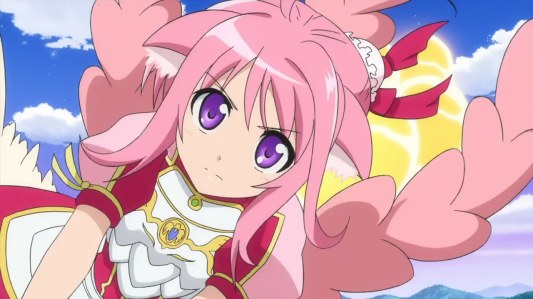 Without any established system or hierarchy in place to tell us who should win each fight or who’s a better fighter than the other, then the clashes and brawls in Dog Days’ are left to be random and positioned so that virtually anybody could win.  Sure, we have some guesses or ideas but each party has an equal opportunity to emerge victorious and still wearing their armor (hopefully).  If one reviews the previous battles, and even going back to the original season, it becomes apparent that anyone can win a fight against anyone, just matters how the fight unfolds and how determined the fighters are to win. 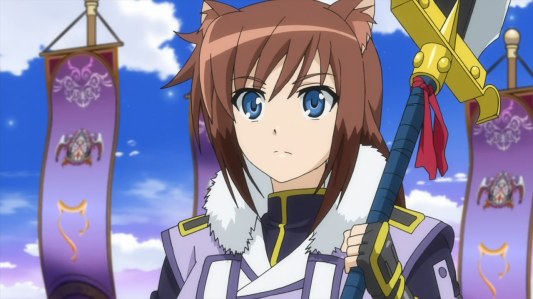 It makes the fights entertaining because the battles can shift or flip so easily, so it makes the whole process a marvelous one to witness, especially when the fighters have never faced each other before.  And there’s always the chance for surprise, too, considering most of these powers and abilities are rather unknown to us at this point, remaining hidden until the appropriate time.  If a power ranking system were in place, it’d diminish the impact that these fights have, leaving us expecting one result based solely on their numbers or classification.  Without such a system, the fights become more variable because these values are masked and unable to be determined by simple and obtainable data like previous fight history or fighting abilities.  We can still continue to form opinions on these fighters and who we think will win the fight but there is little to support these predictions since the series provides us with little more than character’s inflating their egos to intimidate their opponents or hyping another to enhance the significance of their fight. 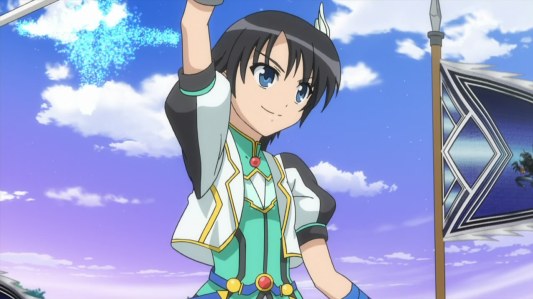 There are no straightforward answers to any of the battles in Dog Days’ based solely on their strength and fighting ability.  However, the best way to predict the winner to a fight is to carefully analyze the story and the characters present and figure out how the outcome of the fight will impact the story (or impact the fanservice since that’s become a requirement for Dog Days’ now).  This system proves more fruitful than ones based on who the fighters are or their perceived strength but it isn’t always right.  Using such a system alone does not account well for draws or fights that end prematurely.  Regardless of whether it’s correct or not, the fights still prove to be entertaining to the audience, especially when the results are not what the predictor expects.  This unpredictable nature to the fights truly enhances the fun in Dog Days’ and continues to play an important role in the entertainment of the series as well as the development of its characters and progress of its story. 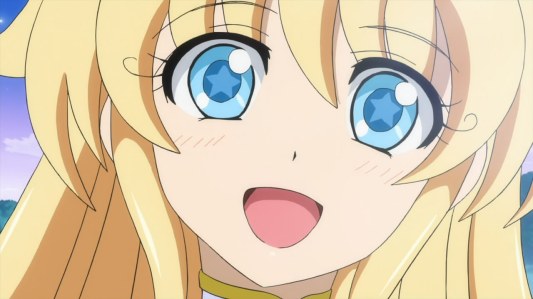 I hope Adélaïde realizes that wearing a disguise and going into this playful war, known to the kids these days as the Union Fest, is not really the best idea.  Considering that every fight concludes with the removal of someone’s armor, and that would include Adel’s disguise, she needs to prove victorious over every opponent she faces to otherwise remain unknown and mysterious.  Though she might be considered the strongest of all the fighters present, something that has yet to be determined with Leonmichelle, Broiche, and Isuka still around, that doesn’t guarantee her any margin of victory, especially if she’s going to fight a team of warriors like the end of the episode suggests.  Given the odds she faces, including the history of the series and how ecchi it has become, I’m willing to bet we’ll see her identity exposed to the public (along with probably her bra and panties) at around the conclusion of the war games.  From there, the Hero King and the Demon King will probably be introduced into society once again and be able to appear in society rather than remain hidden and secluded like they have been since their return to Flonyard.  Can’t wait to see Valério’s reaction to Adel losing her armor since you know he’ll go crazy. 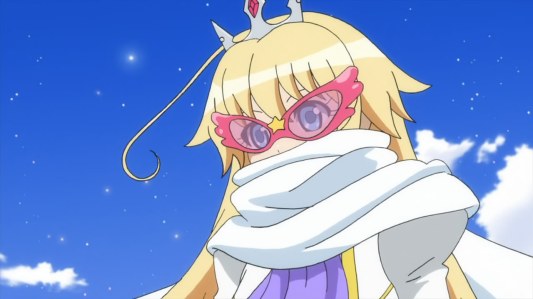 This entry was posted on September 11, 2012, 8:01 PM and is filed under Anime, Dog Days. You can follow any responses to this entry through RSS 2.0. You can leave a response, or trackback from your own site.