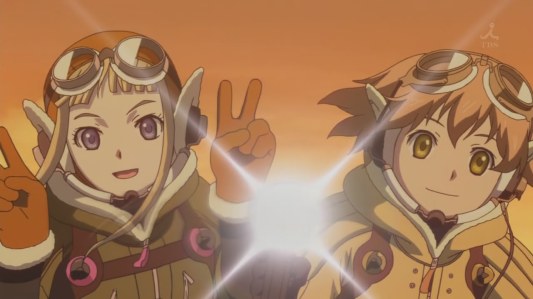 Last Exile Fam shines its brightest when Fam and Millia are together.

It should be no surprise that the best moments in this anime are when the two main characters of this anime are on the screen together.  Fam and Millia are the most well-defined and properly developed characters in the anime to this point and both display strong personalities that make their characters admirable and rational.  And when they are together, like in this episode which featured the first extended sequence with Fam and Millia flying together, everything clicks.  The story progresses straightforwardly, conflicts feel more intense, and even the lesser characters around them feed off their energy and become better, too.  Giselle crying behind the porthole on the Silvius or the confrontation with Luscinia (episode 2) are fine examples for those three points each.

Another aspect of what makes Fam and Millia so great is that their relationship is authentic, motivating, and quite intricate.  Scenes of those two together have been some of the most monumental in the anime and have done wonders to creating the complex friendship we see before us.  Probably the most memorable are the times when Millia grabbed Fam’s arm and begged her to save her sister and when Millia viewed the destruction of her nation in the steady torrent of rain.  These strong scenes provided a solid structure for which to build their relationship on and build a friendship the correct way.  We have a better understanding of what drives Millia and Fam and why they work so hard together to achieve common goals.  And with this understanding, we are more interested in their actions and outcomes and what plans they have for the eventual restoration of Millia’s homeland.  Without this vigorous relationship, the two characters wouldn’t have the same effect on the anime like when they are together, which explains why scenes of them together are much better than scenes of them separate.  That and the story seems better, too, unlike the whole tricking an idiot military out of a warship and dressing as maids bits.

Hopefully this episode is a sign of things to come with Millia being Fam’s navigator and Giselle struggling with her own problems as a side-story.  Millia’s navigation skills are certainly limited compared to the accomplished Giselle but she does enough to keep them alive and flying high.  I’m sure we’ll see her paired up with Fam in vanships in the upcoming episodes.  And if Last Exile Fam continues to reuse elements from the original Last Exile, I expect to see Fam and Giselle get into a dispute like Tatiana and Alis did and have those two separate like in the original series.  At least that’s what should happen, especially after Alis gave that advice to Giselle in the previous episode.  And if that’s the case, then there will be more time for Fam and Millia to fly through the blue skies in their vanship.  And if that’s the case, then consider it a positive sign for the series since those scenes are when the anime is at its best.

The seafaring elements were dominant in this episode, often to the point where I was wondering if the heavy clouds were supposed to represent the ocean and these airships embody nautical vessels.  It really pleased me to see that symbolism in this anime since I always imagined these skirmishes to be similar to naval battles from some adventurous century where rigged tall ships lined up parallel and fired cannons at each other.  That and the heavy pirate themes, too.  But in this episode unlike any other, the clouds behaved like the surface of the ocean and anything within the clouds suffered serious consequences.  The torpedoes, depth charges, plus the subsequent underwater explosions, all fit the water symbolism well, too.  Plus the Silvius diving ‘under the clouds’ (read: underwater) and Cecily using ‘acoustics’ (read: sonar… literally, she used passive sonar there) definitely removed all doubt.  They didn’t even need the ship sinking into the clouds.  That was downright awesome but completely overkill for this theme.  There are unambiguous water/ocean/sailing elements in Last Exile Fam beyond the airships themselves.  But why did it wait this long for this aspect to be featured so much? 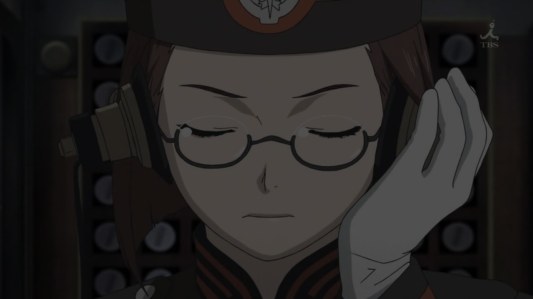 Keep in mind, I do enjoy the symbolism used by the environment in this episode to give the battle a real maritime angle to it but this is an anime about flying and freedom in the blue skies.  There won’t be many other chances for the anime to go with this naval theme that it used in this episode since it will require a heavy layer of clouds to produce such an effect.  In the episode previous, the clouds were above the three fleets and the episode had a completely different feel to it.  It felt completely aerial with no real sense of sailing on the ocean like this episode.  I wonder if the anime will use the next battle as an opportunity to continue this symbolism shortly after this one or if this theme will fade away and eventually become forgotten.  I don’t see these elements being relevant to many other battles in the near future, especially since virtually every other battle were in ideal weather and environmental conditions.  And those marine themes don’t really translate well with vanships either.  I’m not saying we won’t see any naval-esque battles anymore in Last Exile Fam but I expect to see a quick reduction in this symbolism quickly as the anime is likely to return to clear skies with dots of fluffy, white clouds.  A shame but it will probably work out for the best.

This entry was posted on December 7, 2011, 3:38 AM and is filed under Anime, Last Exile. You can follow any responses to this entry through RSS 2.0. You can leave a response, or trackback from your own site.