None of the three shows are here yet, but judging from the results of this week, consider this a plus for any shows that’s undecided at this point.  Doesn’t mean they’re being added to the list, but it does make it easier for them when their second episodes air this week.

Sword Art Online – Sword Art Online possessed an array of positive attributes but remains undecided due to the undeniably atrocious set-up and plot of the story (but we’ll get to that later).  The art, especially when used to construct the environment and general scenery, is breathtaking.  Not only are the landscapes sights to behold in this online fantasy realm, but the use of lighting and color breathes life into the world and places the audience inside the game with the players without being in their dire situation.  The main character seems reasonable and likable, two desirable traits for any lead who’s a male highschooler given how appalling they tend to be in anime.  Music has been outstanding, giving the anime an ambiance to it to make it feel like a game without sacrificing emotion or personality.  But that’s where the compliments dry up, so all that remains are the offenses.  For one, this has to be the absolute WORST set-up for an anime that I can ever remember.  If anyone can even bring up another anime that’s worthy of this dishonor, please bring it up in the comments section because this is amazingly shoddy.  I almost feel ashamed or apologetic for having watched this, but apparently the owner of the game thought it was a fantastic idea to condition his game so that people would die in real life when they died in the game.  How the fuck do you get away with that?  How did anyone else in this corporation agree to this?  Wouldn’t the Dev Team think removing the log out button would be a bad idea?  What about the chip in the helmets that kills people when they take it off?  How are people going to survive in this comatose state without being hooked up to TPN?  How was sanctioning murder part of the business proposal?  Wouldn’t the government send in a SWAT team or something to capture and imprison the guy who publically admitted to murder?  And what about the company’s stock?  How was any of this financed?  It makes zero sense.  I’ve heard of a suspension of disbelief but there’s no way anyone could suspend it for this long and be okay with it.  I mean, I hope everyone who watched this realize that the entire set-up of this anime is the greatest bullshit set-up in the history of anime and called out the anime as a result. But thankfully, that part has passed and the story can progress with the protagonist stuck inside of a video game where life and death is what he gambles with in every action in every battle.  I’m sure the anime will improve but damn, that set-up really pissed me off.  Oh, and perhaps the worst part about it all, he changed all the in-game female avatars back into the men that actually play them.  It’s like the anime is self-conscious and wants me to drop it.  Everything still pisses me off but all those aspects are over now, and finally, the anime can progress as it intended giving us a better example of how to evaluate and judge this show.  I’ll need to wait until the second episode is over before adding this to my list.

Kokoro Connect – I’m inclined to designate this a supernatural anime more than a slice-of-life one for the fact that the story of the anime (as well as its gimmick) revolves around people switching bodies with each other.  I’ve always been a fan of this concept in anime when it’s around for an episode, and I’m interested in this idea for a full series, especially with various combinations and how the characters react and grow from these situations.  I can imagine a vast number of potential episodes that this anime can do and, should the writing be somewhere near excellent, I can see this turning into one of the better anime this season.  However, everything else beyond that is a rather tame and mundane slife anime without really any interesting merit.  None of the characters have appealing personalities which unfortunately has become the standard in these semi-serious school anime.  The writers must not have cared how one-dimensional their characters were and opted to mold them around only the one or two descriptive words they obtained from their boss.  Would explain why everyone has been limited to “genki”, “ojou-sama”, and “wresting fan” thus far.  But even with that fault, thankfully no one is excruciatingly annoying and Inaba is cute.  Besides the body-switching, the anime seems to be imprisoned at a school with the members forced into a lackluster club together.  I find the art charming despite being rather plain and the music has been fine.  Among the anime in the undecided section, this one might be the hardest since I don’t expect to come to a definitive answer even by the next episode.  It will depend on how the other anime do since I don’t really mind either keeping it or dropping it.  If I had to guess if it was one or the other, though, I’d guess I’d end up keeping it considering the light volume of anime this season. 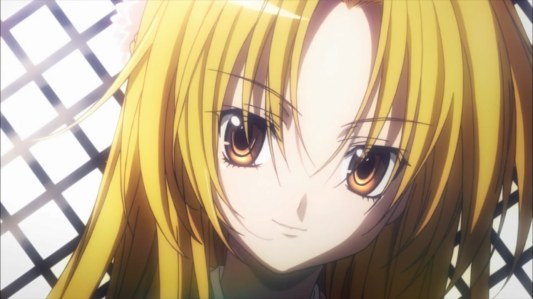 Oda Nobuna no Yabou – Oda Nobuna no Yabou belongs here because it did more wrong than it did right.  The artwork throughout, both in terms of background and characters, is rather pronounced in how it appears, making the characters seem more noticeable or important when they’re on the screen.  You can’t help but have your eyes drawn toward them, even when most of the episode is just people talking.  The setting is of particular interest to me, though I’m not as eager for a feudal Japan setting as I have been recently.  And though my knowledge isn’t up to par on the Sengoku period of Japanese history, I’m going to guess this anime is historically accurate which is something that is better than most other anime which take place in or characters from this era.  But those points aren’t enough to keep me watching this anime.  Perhaps the most offensive aspect of this anime is the male lead who I wish was killed by the stray bullet in the first minute of the anime.  I don’t even need to describe what kind of character he is since you already know but he’s that guy who pissed you off with every action he does.  He gets mad when people call him “monkey”, he openly talks about boobs and girls to strangers, he’s on the receiving end of physical humor from girls, he becomes serious and makes a stand and helps the lead female in some crucial moment only for it to end in a joke a scene later, and he doesn’t appear to be terrible concerned about being teleported into some alternative past with zero hope of getting home.  In other words, he’s the exact same male you find in every harem anime.  The dialogue is uninspired with the cast already a haphazard set of anime tropes, including the girl who’s embarrassed about her large breasts, someone who ends every sentence with varying scores about how shitty of a character she is (though the true score is always 100 points), and we’ve already stumbled upon an army of lolis that talk like lolis but might actually be the best characters in this anime.  The humor proved successful once, so it isn’t worth watching for a comedy.  The romance in this anime is certain to be dreadful since this isn’t geared to be a romance anime either.  Honestly, it’s not even that great of an all-female Sengoku anime, too, so I really don’t know why I should be watching this anime.  In the 24 minutes that I watched this first episode, the anime failed to convince me of any reason on why I should continue to watch this anime.  Any anime that does that deserves to be dropped.

And that’s it.  No, I did not watch every anime that aired this season since plenty were already dropped after reading the synopsis and watching the PVs and CMs.  Everything that was watched and reviewed here were all the shows that made it past that stage and earned the right to be evaluated.  All that remains is figuring out where the undecided anime fall and that depends on their second episodes.  You’ll be able to see which ones make it when the Weekly Anime posts begin again this weekend.

This entry was posted on July 11, 2012, 3:46 AM and is filed under 2012 Summer, Anime, First Impressions. You can follow any responses to this entry through RSS 2.0. You can leave a response, or trackback from your own site.