So what’s the point of any of this?

For the most part, Dog Days’ has been a collection of haphazard, disconnected events, recounting the activities and adventures of Shinku and his friends in Flonyard.  And though some episodes conclude with some development taking place, such as the introduction of Adélaïde and Valério, the institution of Hero Crystals and Bright Power Gears, and now with Yuki’s newly acquired ability to swap bodies with anyone.  But what is this all building to, why are we seeing these developments take place?  With no structure plot apparent and the finale hastily approaching, the question quickly turns to ask, what is the point of everything that’s happened thus far in Dog Days’?

The plot of Dog Days’ is unique when compared to other anime.  Whereas many anime depict a traditional story, a conflict with escalating action that hits a climax and then a resolution, Dog Days’ has no definable plot structure.  Instead, each episode operates in this manner, so that the anime repeats this process cyclically on a per episode basis.  While other anime have a conflict established and are working towards its resolution, either a baddie that needs to be defeated, a world that needs to be saved, or a romance that needs to be realized, Dog Days’ shows random adventures that lack a unified direction or purpose; they’re just fun ventures for the character to amuse themselves with.  And though there could be some unrealized and underappreciated central storyline going on beyond ‘Shinku and friends on vacation in Flonyard’, it’s a pretty safe bet to say there’s no plot to Dog Days’.  But still, even without any type of main storyline going on, there’s development going on in nearly every episode.

Most of the episodes in this season of Dog Days’ have ended with some significant character or setting development, either expanding the role of its characters or inventing a new system for which to explain the world or introduce new fighting styles.  Even once, it ended an episode with the introduction of two of the most powerful characters to ever grace the series.  These advances are what you’d expect from an anime attempting to tell a story, one trying to use these events to emphasize growth as a means to overcome their conflict and achieve a resolution.  But no, in Dog Days’, these developments rarely build off each other nor are they connected like sequential events in a story.  They do serve some purposes and do appear from time to time (the Hero Crystals, the Bright Power Gears, etc.) but not as a means to overcome an obstacle in the story or to continue character or setting growth.  You’d think there’ll be some final fight between something that requires all these developments but it doesn’t feel that way with no sense of a conflict or ending in place.  But no, these progressions appear to be nothing more than bonuses to the series, features that make the fighting more exciting or the series more fun.  So, is there any sort of a purpose or meaning toward anything happening in Dog Days’?

Given what we’ve seen thus far in Dog Days’, there does seem to be a purpose to these developments beyond the additional entertainment value of the series.  For one, it allows us to see the growth and progression the characters have gone through.  An example of this would be Noir wanting to form a special forces unit aimed at hunting demons in Galette.  In order to even have a chance with such frightening and powerful creatures, one needs to match their power and obtaining a Bright Power Gear in one such option.  Therefore, her obtaining that ability puts her one step closer to her goal, despite the fact we’ve never seen her use it since her playful duel with Eclair.  Another are the Hero Crystals, symbolic of the potential within Shinku and Gaul to be the heroes for their nations.  Their employment in the series since battling the giant rat demon has been minimal and inconsequential, but the purpose behind their presence indicates how righteous and magnanimous they are to be recognized as ‘official’ heroes.  Another purpose for these minor developments is to expand upon the world.  Adel’s appearance not only highlighted her role as a savior to Pastillage but also disclosed details about the nation’s and the world’s troubled past with Valério.  We’ve also learned about Yukikaze’s past, one littered with fond childhood memories in Biscotti, and her growth into the young lady we see before us now.  And with Eclair’s and Noir’s past being revealed during the training excursion, not to mention understanding more about what makes a demon-hunter a successful one, all have clarified and expanded the setting of Dog Days’.  And that’s not all, there are likely to be more, fine details about the series from these developments that go beyond being the reward for completing an adventure.  So while these changes do not necessarily continuously build to help resolve a conflict for the characters in the series, they serve a purpose of developing the characters and the setting of Dog Days’.  And not only that, but they have the added benefit of making the fights more entertaining, the characters more fascinating, and the anime much more enjoyable. 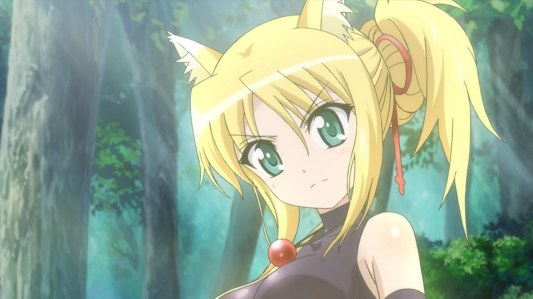 Can’t help but feel that there could’ve been much more with the body-swapping in this episode, especially when the problem failed to resolve itself with the monster and Millhiore returning to normal but Yukikaze and Shinku still reversed.  Had the incident lingered and been used to play around or confuse the other characters, as it was suggested near the end, the episode could’ve ended up being one of the best in terms of comedy and entertainment.  Instead, the incident ended without anything noteworthy happening besides the development of Yukikaze obtaining that ability for herself.  Hopefully the ability will resurface and be used again sometime soon, and hopefully in that playful way too, because I’d be eager to see what happens with the characters in such an awkward and amusing situation.  That being said, it almost feels as if this episode missed a golden opportunity but at least the possibility remains for more fun should Yukikaze ever use the ability for fun and not for fighting. 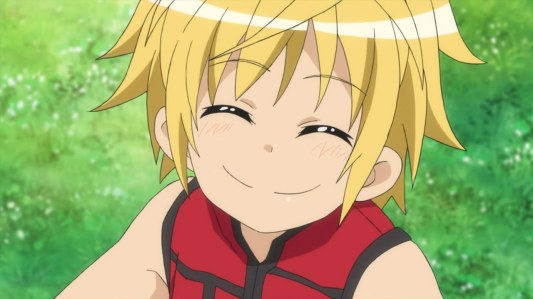 This entry was posted on September 20, 2012, 12:34 AM and is filed under Anime, Dog Days. You can follow any responses to this entry through RSS 2.0. You can leave a response, or trackback from your own site.