I am debating whether I want to keep Re:_Hamatora and Fate/kaleid Liner Prisma Illya 2wei! this season. While I did enjoy Re:_Hamatora, I only enjoyed it while Nice was gone. The dynamic without Nice was much, much better than anything from the first season and I was hopeful that the sequel would have him gone for most of the time. Looks like it’ll just be one episode. Oh well. If the series returns to mediocrity in its second episode, I won’t hesitate in dropping it. And it’s the same for Illya, too. I kept hearing that the manga gets darker and that it’s worth the wait. Well, it’s been more than one season now and the only thing remotely dark about Illya is now we have a tan-skinned Illya. If that’s what everyone’s definition of a ‘darker’ anime is, then I’m through with taking advice from anonymous anime fans. I can’t see how the anime will get better… and even if it does, it’s still a long way from good. It’ll get one more episode before it’s dropped for good.

Hanayamata had a solid yet unremarkable first episode. Although the anime is entertaining and engaging, primarily due to Hana’s vivacious and infectious personality, the actual content was rather ordinary and one-dimensional. The plot so far is fairly routine for an anime; it’s about a shy girl who makes friends through the X club at school. Been there, done that. But for Hanayamata, the X is what makes this anime special. I know nothing about Yosakoi dancing, so the subject of this anime will be unique compared to its peers, and I’ve always enjoy smooth and bountiful animation, something the opening sequence promises with various scenes of the quintet of girls dancing lively and beautifully. And though I bemoaned the anime for being conventional earlier, I see it as somewhat of a positive. That combination of being entertaining while having a dull story bodes well for Hanayamata seeing as it can carry itself through on entertainment value alone when not much is happening. Still, the first episode of Hanayamata was far from impressive, but it indicates that the series will soon improve, especially once the Yosakoi dance club forms and all the characters are together. What I’m looking forward to the most with Hanayamata is the comedy, the dances, and to see Naru grow as a character. If the anime can satisfy me in regards to these aspects, then picking up Hanayamata for this summer will be a success.

To me, Persona 4 the Golden Animation (P4GA) is different enough from Persona 4 the Animation (P4A) to warrant watching it. Even though the events of this anime will parallel P4A from start to finish, I’m fascinated to see how Marie factors into the story and how one new character alters the dynamic of the series. You could call it an experiment in seeing how much of an influence one character can have on a story. You could also say I’m curious to see how A-1 Pictures handles P4GA after AIC produced P4A. Yeah, even though the staffs are virtually the same between P4A and P4GA, I’m entranced by the fact that we get to see this story developed by two different studios. Sure, it might be a little like Endless Eight with slight alterations on the same story, but I wouldn’t mind reliving Persona’s story one more time, especially if the anime is abbreviate and only 12 episodes long. I doubt I’ll enjoy P4GA as much as I did P4A, but there’s enough new material and a new style to keep me invested in this anime for the duration of its run.

Zankyou no Terror is a dazzling display of how astute directing, insightful writing, and authentic characterization are the foundations for which to develop an unforgettable anime. These fundamental concepts were executed brilliantly in the first episode, starting at the very beginning with the Nine’s and Twelve’s raid, all the way through to the end with the Tokyo Metropolitan Government Building crumpling after the terrorist attack. Of particular note is Lisa’s character, who’s monologues and symbolism were perfect. Her descriptions of Arata and Touji provided invaluable insight into her perception of their characters and the scene where she jumped drew remarkable parallels to the earlier scenes when she was bullied by her fellow classmates. Zankyou no Terror is incredibly cerebral and intelligent and will continue to be fascinating as the series continues, especially after their first major attack. In addition to that, the anime features a vivid and pragmatic art style that dwells heavily in realism… and it’s gorgeous. The anime can go in any number of directions from this point forward, so it’ll be interesting to see how this series develop and how we come to understand the characters of Arata, Touji and Lisa before the finale. I’m already enchanted with the prospects of this series and can’t wait to see what happens next. Definitely a keeper for this anime season. 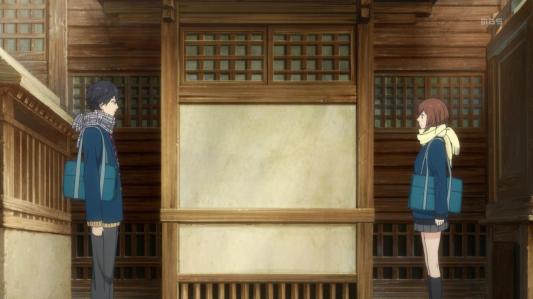 Wow, that art style… it’s just like watching Kimi ni Todoke all over again. Unfortunately for me, it’s not quite the same as Kimi ni Todoke. What elevated that shoujo romance over this shoujo romance, and also the main reason why Ao Haru Ride is in the Undecided category, is that I don’t see the charm here. Ao Haru Ride is decent at best, largely because the romance started off on a huge red flag – a stupid misunderstanding with neither side talking things out. Furthermore, I don’t think I’ll like Futaba and Kou as the leads for the romance in this anime. Futuba would be fine as a sidekick, but her artificial personality is already a bit tiring. Kou is a huge dick to the girl he once liked, so to see him act this way is a huge turn-off. And given the tedious personalities of these two, I’m not sure I want to see what the other characters are like, especially the male love rival who we already know will be blonde/light brown and nicer and whatnot. Yeah, I want to drop the anime after just one episode, but I did enjoy it and I am really fond of the animation and art style. It isn’t the same as Kimi ni Todoke, which featured a more charming cast and superior comedy, but Ao Haru Ride is a decent anime, and the first episode will probably be the hardest for me. If the series picks up in the second episode, then I’ll strongly consider keeping it. Otherwise, if it falls into the same pattern that every shoujo romance anime does, then it’s gonna be dropped.

Again, nothing was dropped from the shows covered in this post.

This entry was posted on July 13, 2014, 4:31 PM and is filed under 2014 Summer, Anime, First Impressions. You can follow any responses to this entry through RSS 2.0. You can leave a response, or trackback from your own site.