This week: appreciating the visual aesthetics of Uchouten Kazoku, the use of emotion in Shingeki no Kyojin, pink blood in Danganronpa, and the team failing to act as a team as a strength for Gatchaman Crowds. 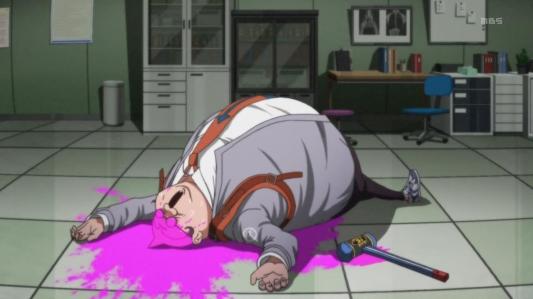 I don’t know what it is about the pink blood in Danganronpa, but I don’t like it.  Whether it’s intended to make the deaths more cartoony or kiddy or simply less frightening, it’s an aspect that seems to distract from the overall mood and theme of the series with death and despair as major hallmarks.  But pink blood?  If anything, the pink blood almost laughs at the whole notion of despair, doom and gloom that the series seems to love.  Why not just go with red and have everything line up?  Really, what’s the deal with the pink blood?  Unless they’re robots from Key the Metal Idol, I don’t get it.

Although the six Gatchaman heroes from a team, complete with their own secret hideout and badass leader (J.J. Robinson), they rarely act or function as a unit.  Really, besides meetings, briefings and general hangout sessions, when have we ever seen more than 3 or 4 of them together for a mission or objective?  Instead, it’s like it’s a collection of misfits who just so happen to share some similar interests but go about as individuals.  It’s rather quite pleasing to see some dysfunction and disconnect between the characters and their leaders in Gatchaman Crowds, so seeing them work like this, with the possibility of them acting like a team later on, is a strange positive for this series. 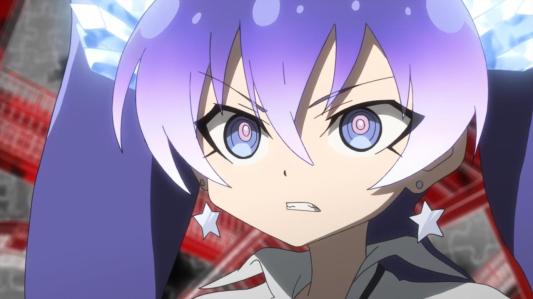 Look at their heads.  Then look at their necks.  Unless their necks are reinforced with steel rebar and concrete, I don’t understand how their necks work.  Like, not even from a physical standpoint of trying to understand how it supports the weight of their heads, if you think about it anatomically, it still doesn’t make sense.  And no, I’m not trying to be funny here; I’m legitimately concerned about their health.  Fortunately, it appears as though the adults in this series don’t suffer from severe cases of ‘moe gigantism’ in their heads, but still, the anorexia in this anime is just as disturbing as the Daemonia who kill little girls for fun.

I have trouble recalling an anime with such a distinct and constant use and expression of emotion like what you see in Attack on Titan.  Every character in every episode has distinguishable expressions on their faces and in their voices.  You can clearly see how every character feels whenever they’re on the screen.  Just the art and aesthetics of this series do so well to convey their emotions, especially with how strong they are at times.  It’s almost overwhelming at times, the amount of passion and excitement you see in just about every scene.  And it’s really quite entertaining too, especially since you can share in the experience or mock the series for being too over-the-top.  Either way, the constant onslaught of overpowering emotion is one of the best things Attack on Titan has going for it, especially now that the action has picked up to match the already-established emotions.

How do the girls get away with bringing guns in the school?  And how does an all-girls school even allow them to cosplay in bikinis for a ‘wet paper contest’?  I realize I’m not supposed to be thinking about stuff like this, but still… suspension of disbelief only goes so far… that and I despise having school themed episodes like this in anime like C3-bu, a show where the interest and excitement clearly lie beyond the borders of Stella Women’s Academy. 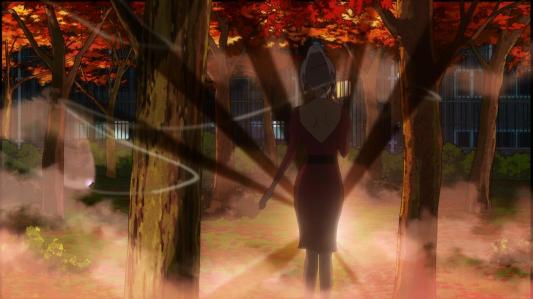 I’ve always been a fan of the art, color, lighting, animation, aesthetics and cinematography of P.A. Works, always hailing it among the best in the industry, but Uchouten Kazoku raises the bar for what P.A. Works is capable of and what a quality anime should look like.  Almost everything in Uchouten Kazoku is visually appealing, thanks to a careful combination of the above qualities, and this episode seemed to highlight this anime’s strength in a select few scenes.  Really, the words right here, right now don’t do this anime the justice that it deserves and only can truly be appreciated by the fans watching and studying its beautiful illustrations.  I can only hope that these screenshots do the series credit, especially after the masterpiece that was episode 6.

This entry was posted on August 26, 2013, 9:21 PM and is filed under 2013 Summer, Anime. You can follow any responses to this entry through RSS 2.0. You can leave a response, or trackback from your own site.