Decided to wait until all the shows aired before wrapping up the final of my First Impressions with Inari, Konkon, Koi Iroha being the last.  Since I never did post a Season Preview, I suppose all the anime I reviewed during the First Impressions is a surrogate for the shows I decided to watch besides Chuunibyou Demo Koi ga Shitai! Ren and Silver Spoon S2 which are sequels to shows I’ve watched and liked.  So with that, onto the last remaining anime of Winter 2014!

I don’t think Sekai Seifuku – Bouryaku no Zvezda is particularly good or intriguing or thought-provoking or anything of that nature, but I was thoroughly entertained with this first episode and it left me wanting more.  That being said though, I’m not sure what other merits this anime has besides its amusement.  The characters are all too one-dimensional and they’re all based off silly or outrageous features which means the cast is going to suffer in this one.  Yes, that even includes our deceivingly attractive male lead (yes, imagine if he were actually a girl, you’ll understand) Jimon and super-loli super loli Kate.  The story might be fun or intriguing depending on how it’s played out, and I’d enjoy it better if they struggled and failed often (a la Team Rocket style) but the fight at the end of the first episode convinced me otherwise.  It’ll probably be a series of minor skirmishes that escalate and build up as they begin to control more of the world which… is meh at best and deplorable at worst.  However, I did find myself entertained by this anime and by the antics of Kate, or Venera-sama as she’s dubbed herself.  Whether this proves to be entertaining throughout or discovers some other worthwhile merits will remain to be seen.  That being said, I’ll be around to see it since I have no plans of dropping this any time soon. 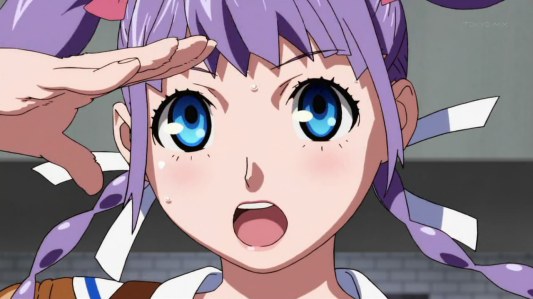 One of the more impressive anime this season, Wizard Barristers is a complete anime that combines a stimulating plot with plenty of satisfying action, a hint of delicate comedy, and set in a pulsating, incredible world with the refined and iconic art style from Yasuomi Umetsu (Mezzo Forte, Kite).  What I enjoyed the most out of Wizard Barristers that it’s dynamic.  And I’m not just talking about the powerful and exciting action, like the opening scene with the Wud (wizard) going ballistic on the train, but rather the emotion and enthusiasm of its characters, like Cecil’s ambition to take a client despite still being a rookie or Moyo’s obsession over Cecil.  I love this energy and passion that’s oozing from this anime and I’m thankful there’s plenty of action, too.  The cast hasn’t been fully introduced yet, but they show promise in their limited time thus far.  Cecil is spirited and can carry the show on her own, but I’m hoping someone else will step up and that it will be someone in addition to her budding rival, Hotaru (because you know she’ll step up).  That being said, the character designs for this anime are sensational, especially Ageha with her butterflies and Seseri with his vivacious, blue hair.  Although the pacing was slow in the first episode, it was never lethargic and stuff was always happening, meaning I never felt bored.  You could even say the pacing was set to such a pace to keep the story thorough and detailed, but I’m anticipating it was done so to finish this little story arc by the end of episode 2.  Really, I have no qualms with Wizard Barristers at this point and figure that this will be one of the top anime of the season for me.  Where it will end up at the end of the season will depend on how well this series performs from here on out. 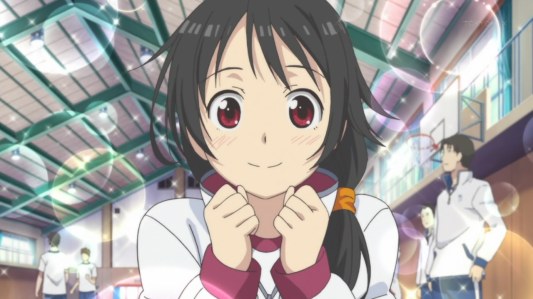 Perhaps the biggest surprise of the season thus far is a simple anime called Inari, Konkon, Koi Iroha.  This delightful and charming anime centers on a timid and simpleminded schoolgirl, Inari, who has an innocent crush on one of the most popular male classmates.  And while it sounds dull, unoriginal and unimpressive, it’s really Inari who makes this anime great.  No, it’s not because of her newly acquired shape-shifting ability and all the potentially hilarious and heartwarming stories that will unfold but because her character is a blank slate for which to construct a magnificent character from.  What I love most about this anime is that Inari is a cheerful and compassionate girl who has her share of troubles.  What this anime will be about will be Inari maturing as a character and growing as a person, overcoming her deficiencies and correcting her mistakes and becoming a shining person that makes everyone around her happy and not awkward.  And with her metamorphosis ability granted by Ukanomitama-no-kami, the anime will be able to explore her character and demonstrate her growth through a variety of hilarious and heartening ways.  The romantic angle is also encouraging to me (what’s this, two romance anime I like in one season??) since it was naïve and innocent, ranging from pulling down her crush’s pants to crying over learning he has a girl he likes besides her.  The romance feels genuine and not forcefully one-sided or with a clueless character, so I thank Inari for being smart with its romance.  Beyond that, the anime does a number of other things well, too.  The art style is aggressively cute which matches Inari’s personality perfectly.  The mysticism is a pleasant touch, though I wonder what role Ukanomitama-no-kami will play going forward.  I also found the jokes to be sweet though not very humorous.  All in all, the anime is one of the better ones this season.  I can only hope that this anime delivers with its character development of Inari since that is what I’m looking forward to the most with Inari, Konkon, Koi Iroha.

Nothing in this section, which means the other three anime are…

Shin Oonuma is my favorite director (and he should be your favorite director, too) and his vivid, exhilarating and colorful style shines brightly in this anime, though it’s not enough to illuminate the abysmal source material that he’s working with in No-Rin.  The style reminds me heavily of Baka to Test to Shoukanjuu with its frequent cutaways to chibi comedy, pastel coloring, dramatic cinematography and enthusiastically animated characters.  But the major difference between that and this are in its story and its characters.  Unfortunately for No-Rin, it’s an F-class in both.  It’s bad enough when I don’t like the story, but when I don’t like any of the characters either, it’s impossible for me to enjoy, let alone watch, an anime.  The idiotic story and uninteresting characters of No-Rin are more than enough for me to drop it, even after going through the brilliant mind of Shin Oonuma.  Then again, the only reason why I wanted to watch this anime was because his name was attached to this title.  I never thought I’d enjoy the story or the characters and was more curious to see what kinda magic Shin Oonuma would work with this material.  Turns out that his work is still phenomenal but not phenomenal enough to keep me invested and make watching a full season of this worthwhile.  That being said, I’ll eagerly await his next anime and hope for better results.

Although the visual style of Sakura Trick is a delightful array of soft and gentle colors, the characters and plot could not have been more boring.  Yes, it’s sweet and innocent yuri love but that being the only thing in this anime is a pathetic excuse for a story.  I wouldn’t mind if it were a subplot or maybe something important to explain or explore the characters with, but when that’s the only thing going on in the show, what’s the point? There really is none, is there?  Unless you’re a diehard yuri fan, I can’t see how anyone could find this show enjoyable, especially after one episode.  It’s cute and colorful and lighthearted but it’s clearly not for me. 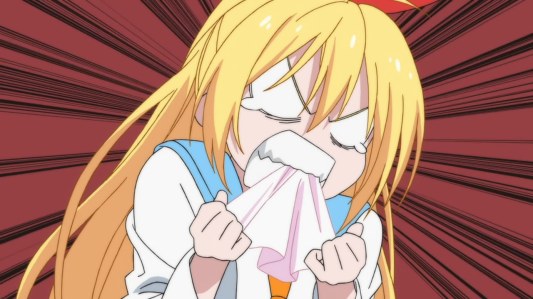 I want to like Nisekoi, but I can’t.  There are a number of reasons why I want to watch this show, but I won’t.  It’s successful in its comedy, has a magnificent visual style, and features two effective characters as its male and female leads.  But that’s still not enough.  What’s keeping me from watching and enjoying Nisekoi is Onodera.  I cannot stand characters like her.  I hate characters like her.  She is literally the key that’s keeping this anime locked for me and it’s because of that stupid key why I hate her character.  The whole childhood romance, ‘let’s-remember-each-other-in-the-future-and-get-married’ bullshit was bad enough but the fact that she refuses to reveal her identify to Ichijou is painful to watch.  Not only that but she still has a crush on him.  What a miserable excuse for a character she is.  And the fact that she’s the other lead female in this anime is appalling.  If it were just Raku and Chitoge, I’d be singing the praises of this anime since those two were actually enjoyable, featured a decent romantic story, had wonderful comedy and made the anime fun to watch.  But the fact that Onodera will be back and will be important to the anime destroys everything about this anime for me.  You might be thinking I’m unreasonable but her character archetype in this type of anime is unforgivable.  That being said, I’d gladly watch the anime if she were to die in the next episode.  Or maybe if someone edited the entire series to remove her, that could work, too.  Otherwise, I’m done.

And with that, we’re done reviewing my initial thoughts, opinions and reviews for the first episodes of the anime of Winter 2014.  Seeing as we’re already into the second week of the season and transitioning into the third, I’ll be back to my regular Weekly Anime posts again shortly.  In the meantime, I’d like to thank you again for stopping by and reading my First Impressions posts for this new anime season.  I can only hope you enjoy this season as much, if not more than, I plan on doing.

This entry was posted on January 20, 2014, 12:52 AM and is filed under 2014 Winter, Anime, First Impressions. You can follow any responses to this entry through RSS 2.0. You can leave a response, or trackback from your own site.