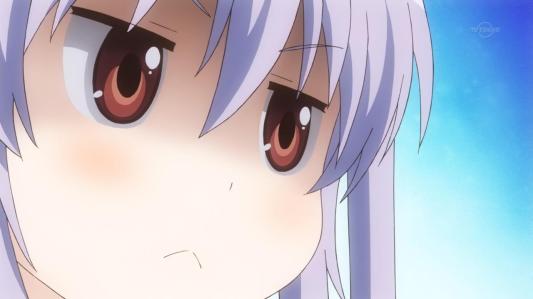 Best episode of the week: Working!!!

Anime trending up this week: Rokka no Yuusha 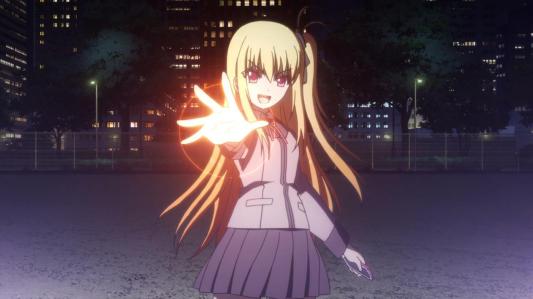 Why are scientists never ethical in anime? Why are they always able to get away with capturing people, conducting experiments against their will and being able to get away with it? You know, if a hundred or so people go missing in a city, I think there might be a couple investigations going on, and probably a few sting operations, too. What’s so hard about having scientists design experiments, be approved through an ethics board, recruit willing participants, and gather information that way? I’ll never understand why scientists are always portrayed as unethical in anime, especially the ones in Charlotte. 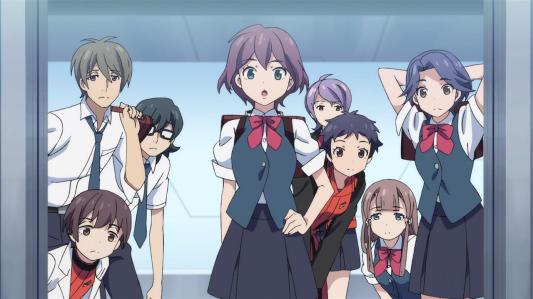 So the ATEC program has recruited some of the best and brightest students from all over Mars(?) to study and develop under the roof of Kirishina Aerospace Heavy Industries, one of the most respected space flight companies in the universe, and the response to this is to crash the program, and disband it? Yeah, sure, the program is costing an unreasonable amount of money, but there are other ways of handling the program rather than screwing them over and driving the future of your company to your competitors (these are the best and brightest, after all). Why not do what many student researchers do and have each one join a specific lab for them to develop their skills, or intern with a leader in their field within Kirishina? Hell, you could still keep the program but have the students focus on their own individual projects within these labs, or, if they wanted to build a new racing engine like we see in the anime, why not have it under the direct supervision of a number of relevant engineers? Like, I know we’re supposed to believe these people are the best businessmen in the world because the anime has told us that in every episode, but there are probably a thousand better ways to handle this situation than what they’re doing in the anime. 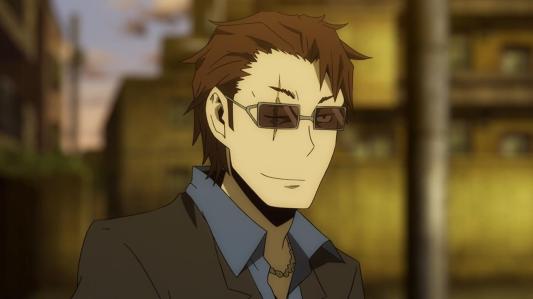 In Durarara!!x2 Ten, we saw Akabayashi flush some illicit drugs down the toilet to dispose of them. However, flushing drugs down the toilet is not a proper method of disposal. Putting drugs in the toilet is a key method of introducing them to the water supply and this has even been linked to traceable amounts of antibiotics, hormones, hypertension medications, narcotics, and others in the ocean and in our water supplies. Additionally, water treatment plants aren’t able to completely remove these small amounts of pharmaceuticals, meaning they’re able to make it into our drinking water. Instead, there are other harmless methods of disposing medications that do not cause potentially adverse effects. That being said, there are indeed some medications that are safe to flush down the toilet, but these are controlled medications that can be harmful, or potentially fatal, if children or pets ingest them. If you have questions about the disposal of medications, contact your local pharmacy for more information. 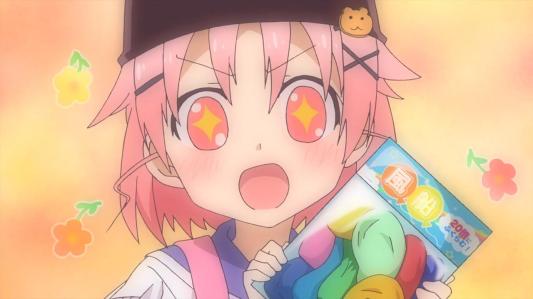 Since we are now fully aware of Yuki’s delusions, now we can play the game of what’s real and what’s not. Specifically, we can play the game of whether the dog (Taroumaru) and the teacher (Megumi-sensei) are real or not. At this point, I’m inclined to believe the dog is real but the teacher is not. The evidence I’ve gathered thus far that supports these conclusions is that the other characters, especially Miki, react to the dog. The fact that Miki looks disappointed after Taroumaru turns away from her and that Yuuri holds Taroumaru help convince me the dog is real. As for Megumi-sensei, no one has actively reacted to her presence besides Yuki. At the most, they’ve acknowledged her presence, but they could be doing that because it’s Yuki’s delusion. You also wonder if she’s real or not because she was on the other side of the barricade in the school, ahead of the girls, meaning she would’ve been wandering around with the zombies alone at night. And when the girls found Yuki hiding from the zombie, they were only immediately concerned about her safety and not Megumi-sensei, thus leading me to question if she was really there or not. However, there was a plate of curry in front of her at the beginning, so I’m not sure if that was part of her delusion as well or not. Either way, I’ll be curious to see what happens to these two auxiliary characters, to find out whether they’re real or not. 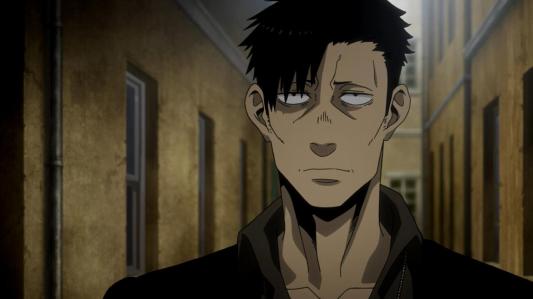 “If you stay in this city too long, you’ll end up not being able to go anywhere.” –Worick

The city of Ergastulum and the setting of Gangsta already fascinated me by the first episode, but it was Worick’s line about the city at the end of the third episode that captivated my interest to understand how it’s depicted and what he really means. To date, all we’ve seen from the setting of Gangsta seems to be a nondescript Sicilian city of Ergastulum. We have yet to see where the city is located though, and what environment it’s in. We have no information about the biome, the climate, the plants and animals, whether the city is by the ocean, in the plains, surrounded by forest, or settled in the mountains. To date, we’ve seen nothing but Ergastulum, a city where all the buildings and alleyways are homogenous with no sense of location or direction… and this might be by design. Worick’s line means that once you stay too long in this city, you’re unable to leave it. And because Gangsta is told through the eyes of Worick and Nicolas, the two “Handymen”, the anime is only able to show us Ergastulum because they have stayed too long and are not able to leave it. To them, Ergastulum is the only world they have. And as a result, the anime has only shown us the city of Ergastulum because that’s all that’s there for them. It isn’t much, but details like this about the setting facilitate hope for me with Gangsta. I’m not completely convinced that this is the reason we’ve only seen Ergastulum, but Worick’s line and how the city and setting have been shown to us has enchanted me. 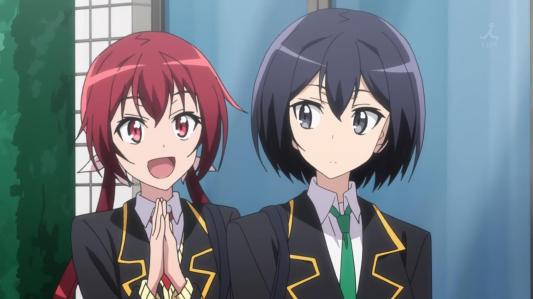 For an anime with essentially nine primary characters, splitting the episodes into multiple acts is probably the most ingenious way of properly distributing air-time for the characters and allowing each to have proper time to develop and contribute to the anime. In fact, I wish more anime took this approach since it helps break up the episodes into shorter, more concise, more focused narratives that are character driven. And hey, if it’s a story about characters you don’t like or don’t care about or is boring, at least it’ll only last 6 more minutes before it changes. I really, really like that about Dandelion, and am thrilled that the anime is presented this way. 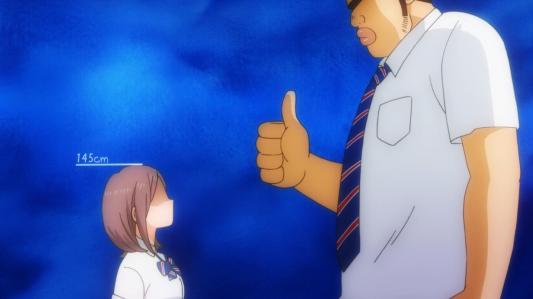 Probably my least favorite part about Ore Monogatari!! are the size inconsistencies with Takeo. Although the inconsistencies weren’t as egregious as previous episodes (or as hilarious), it bothers me that Takeo is constantly shown to be different sizes in almost every shot. For example, in scenes where he’s walking with Rinko, their waists are shown to be the same height… meaning Takeo’s legs are as long as Rinko’s. Or their knees are at the same height… meaning their shins are the same length. Other times, Takeo’s waist is up to Rinko’s shoulders. There are also times where Takeo’s arms change from skinny to ultra-muscular. And yeah, I get that this is an anime, and there is bound to be variation in how the characters are drawn in each shot, but for an anime where a number of jokes and storylines are dependent on his physical appearance, it seems haphazard for there to be so much variability in how he actually appears. And because of that, the constant changing of Takeo’s appearance is the most bothersome aspect of Ore Monogatari!! 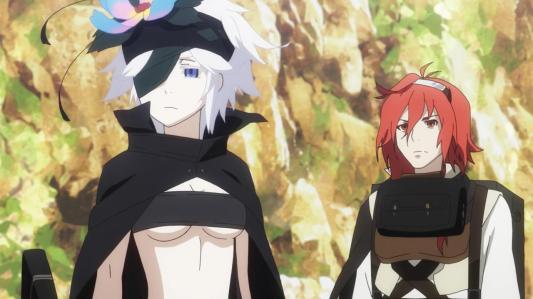 I am terrible at appreciating the music in an anime, so if I notice the music in an anime, that means it’s either really good or really bad. For Rokka no Yuusha, that’s a good thing since I find the music to be one of the best this season, if not this year. Not only does the music do an outstanding job helping to establish the mood and atmosphere in it scenes, but the music swells with emotion and personality. And who doesn’t love orchestrated tracks, especially for a fantasy anime? Michiru Oshima is the composer for Rokka no Yuusha and has composed the music for a number of memorable and remarkable anime, such as Full Metal Alchemist, The Tatami Galaxy, Zetsuen no Tempest, Sakasama no Patema, and many more. I need to keep an eye out for his name in the future since he is probably one of my favorite anime composers and I don’t give her enough attention and respect.  Just go back and rewatch the final scene of the third episode and focus on the track playing during Adlet’s reunion with Nashetanya. Not only is it a beautiful song, but it is perfect for the passion, the excitement, and the drama of the scene. Really, if I’m taking the time to write about the music in an anime, you know that it’s left a positive impression with me. 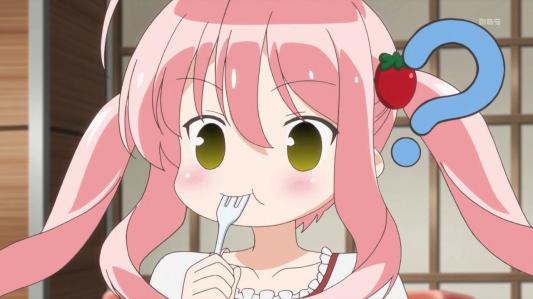 For an anime that heavily depends on its cuteness as its main appeal, Sore ga Seiyuu! does a number of things right. And when talking about the cuteness of an anime, chibi and comical faces are of the utmost importance. And for that, look no further than Ichigo, who undoubtedly leads Sore ga Seiyuu! in this department. Ichigo’s character seems to demonstrate the widest degree of emotions, which makes it easier for her to have a higher number of cute facial expressions, especially compared to Rin who is rather quite calm. Notable examples of Ichigo’s expressions in the second episode are when she learns of her audition at the food prep factory and when eating strawberry shortcake at the diner with Futaba and Rin. Those scenes are noteworthy because they don’t provide much substance or depth to the anime or characters – in fact, they’re actually quite dull – but they’re charming because of how Ichigo is depicted, with cute, chibi expressions. The cuteness of Sore ga Seiyuu! helps support these slower scenes with some entertainment value, helping to keep the anime watchable throughout, and Ichigo does an excellent job for this considering that she seems to be the least serious of the three primary cast members. 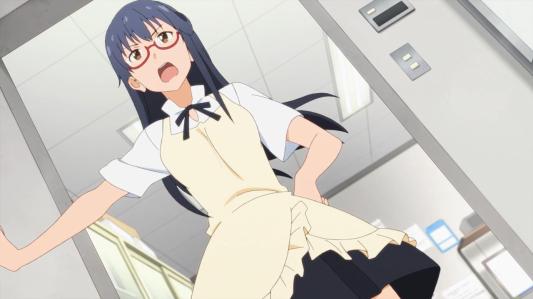 What? It’s not even the final episode of the season and Maya already has an appearance? And LINES? And she’s not the punchline of a joke, too? Wha… what’s going on?

Maya is my favorite character in Working!!, so to see her do something outside the final episode is an encouraging sign, especially since she now has had two episodes that have developed her character. Although it’s routine to see her in the background being “normal” and never associate with the staff, she does seem to have a pretty decent relationship with a number of the other female employees, like Yachiyo, Popura, and Mahiru, so hopefully she can continue to make appearances and have decent comedy this season. And though Maya doesn’t want to associate with the staff at Wagnaria, as we saw, she’s willing to make an appearance and joke for the advancement of being normal and normalness. Someday, I wish it’ll be normal for Maya to be included in normal episodes of Working!!.